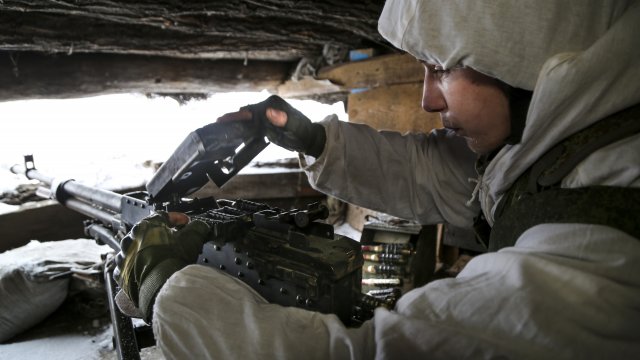 SMS
What's Happening With Russia-Ukraine Tensions?
By Newsy Staff
By Newsy Staff
January 26, 2022
The last major flashpoint between the two countries was in 2014, then in October a buildup of Russian forces caused concern.
SHOW TRANSCRIPT

The last major flashpoint between Russia and Ukraine was back in 2014, when Ukraine ousted its pro-Russian president, and the Russian military annexed Crimea. Since then, pro-Russian separatists, allegedly with Russian military support, have been locked in a conflict with Ukrainian forces in the East. But their tense stalemate had ended after the fighting briefly reignited early last year.

Then in October, a buildup of Russian troops near the Ukrainian border raised major concerns from the United States and Europe. Since then, both sides have been slowly amassing forces near the border.

Ukraine is not part of NATO, but President Vladimir Putin has called NATO’s growing influence in eastern Europe a threat to his country and that his military buildup is a reaction to Ukraine's stronger alliance with NATO.

As of Jan. 15, The Washington Post estimated about 35% of Russia’s available battalion tactical groups and support elements are along both the Russian and Belarus borders with Ukraine, translating into at least 85,000 troops, not including aerospace forces and naval units.

Meanwhile in Ukraine, nationalist and citizen militias have been preparing for a drawn-out guerrilla campaign in case of Russian occupation, according to the New York Times.

The U.S. has sent ambiguous messages on a potential response. Though President Biden has said that U.S. troops will not be sent to Ukraine, it was reported that the Pentagon placed 8,500 troops on alert in case of deployment. The State Department has ordered diplomats' families to leave the U.S. embassy in Ukraine, and all nonessential staff can leave the country.

The U.S. has been sending weapons to Ukraine and coordinating with NATO and European allies on how to respond in case Russia cuts off the continent’s natural gas. Europe is still very dependent on Russian-sourced natural gas for energy, one of the most pressing concerns for European leaders at the moment.

As of today, Secretary of State Antony Blinken says they set out a serious diplomatic path forward, as well as proposals on common ground like confidence building measures and renewing treaties on nuclear weapons disarmament.

NATO's secretary general, Jens Stoltenberg, says his response includes proposals on fixing loopholes on snap military drills. Russian Foreign Minister Sergey Lavrov expects at least one more meeting with his American counterparts to talk through what's been submitted, then he and Russia's defense minister will bring various options to the Russian president himself through what Secretary Blinken said are unprecedented coordination and consultation with EU allies, including a series of economic measures being drawn up to try to convince Russia that invading Ukraine isn't one of those options.

That could mean targeting Russian banks, withholding United States-made technology and even sanctioning Russian President Vladimir Putin himself — something the Kremlin said would completely sever diplomatic ties but have no meaningful effects on the president.

That's on top of deliveries of military equipment to Ukraine to help it defend itself, which Russia has blasted as only escalating the situation.

But the U.S. and NATO have explicitly ruled out helping to defend Ukraine with troops should an invasion take place. Ukraine says it's been consulted on the U.S. response and has no objections, but it is frustrated.

Talks focused more on preventing invasion than on all the other tools Russia has to exert pressure on the country.

For now, Ukrainian intelligence says the number of Russian troops is insufficient for a full scale offensive and has been calling for calm and cool heads.