How DeMaurice Smith Won NFLPA Re-Election For The 3rd Time 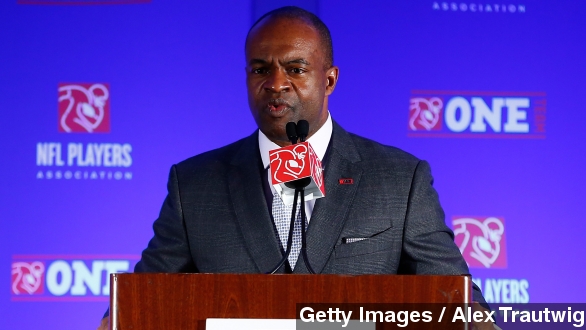 Despite a tumultuous year for NFL players off the field, the NFL Players Association has decided it's happy with its lead representative.

The NFLPA re-elected Executive Director DeMaurice Smith in a unanimous, first-ballot vote Sunday night. He beat out eight other candidates.

The vote was seen as one of the most contested Smith has faced since winning the job in 2009.

Smith beat three candidates in 2009 and ran unopposed in 2012. But the eight-candidate field this year was seen as a bit of a coup against Smith. The elections also reportedly got nasty at points. (Video via NFL Players Association)

But Smith got credit for the biggest off-the-field stories of the season — the suspensions of Ray Rice and Adrian Peterson. Both suspensions imposed by NFL commissioner Roger Goodell were overturned after being heard by federal judges, victories for the NFLPA. (Video via WJZ-TV | KJRH)

But Yahoo! writer Charles Robinson doesn't feel like credit was given to the right person in that, tweeting sports labor attorney Jeff Kessler is who should've gotten credit. (Video via Winston & Strawn LLP)

Deadspin wrote before the vote that Smith's competition wasn't terribly strong. "The union has been so weak for so long that it's fostered an environment where this list of clowns can make some legitimate claim," Kyle Wagner wrote.

While this election was an important one, many are pointing to the next one in 2018 to be the biggest deal.

The NFL Collective Bargaining Agreement that Smith and the NFLPA agreed to in 2011 expires in 2020. Whoever is elected in 2018 will be tasked with brokering that next deal.

Which, with Goodell at the helm for the NFL and Smith for the NFLPA, resulted in a bitter stalemate and brief lockout.

"Labor talks have collapsed for now, the players union is dissolved and both sides are taking legal action," Fox News reported.

The NFLPA has not yet released votes from the 31 representatives.