The Ocean Is Losing Oxygen; Here's How It's Affecting Sea Life 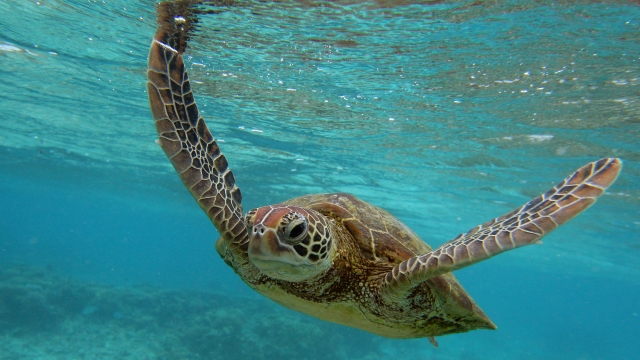 SMS
The Ocean Is Losing Oxygen; Here's How It's Affecting Sea Life
By Lindsey Pulse
By Lindsey Pulse
February 16, 2017
Oxygen levels in the oceans decreased 2 percent between 1960 and 2010 — and new research says it likely won't stop there.
SHOW TRANSCRIPT

The ocean is losing oxygen — and that could be really bad for creatures that live there.

Scientists found global oxygen levels dropped over 2 percent in the ocean between 1960 and 2010.

While 2 percent might sound like a small number, it actually has serious implications for creatures of the deep, fisheries and economies that run on the sea.

That's because the number of "dead zones," or areas with extremely low oxygen concentration, are increasing. Without oxygen, macroorganisms — basically any critters you can see without a microscope — can't survive.

The loss of oxygen is attributed primarily to two things: warming water temperatures and ocean stratification.

Warm water can't hold on to oxygen and other gases like cold water can. Warm water is also less dense. And as the ocean's temperature increases near the surface, less water circulates downward.

That stratification isn't so much a problem for fish that live near the surface. But creatures in the deep might not get the oxygen they need.

Over time, fish have to move upward to more oxygen-rich waters, and that leaves them prone to new problems — like overfishing.

It's worth noting the 2 percent drop is a worldwide average and some areas saw a bigger change than others. The researchers predict the trend will continue and that oxygen levels could drop 1-7 percent by 2100.