How Dangerous Is That Brazilian Wandering Spider? 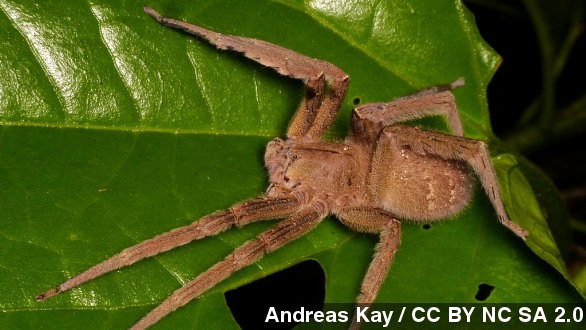 SMS
How Dangerous Is That Brazilian Wandering Spider?

By Sebastian Martinez
October 20, 2014
A London family fled its home after finding a venomous Brazilian wandering spider in some groceries.
SHOW TRANSCRIPT

Getting groceries delivered to your home is a wonderful convenience — not so much when they contain venomous Brazilian spiders you definitely didn't order.

And that’s exactly what one London family got when upscale supermarket Waitrose delivered a Brazilian wandering spider hidden in a bushel of bananas. (Video via Waitrose)

The Daily Mail broke the story, playing up the scary factor by reproducing a full-sized picture of the spider on the front page, along with some fun facts, like the spider's venom is "30 times more powerful than that of a rattlesnake" and it "can kill in 2 hours."

GILLIAN JOSEPH FOR SKY NEWS: "The people in our ears are cringing at this photo. Have a look."

The spider was eventually captured by a pest control expert and safely removed from the house without biting anyone, so disregarding the rampant fear — how about some spider facts?

The Brazilian wandering spider has been rated the most venomous spider in the world by the Guinness Book of World Records, and it does have a reputation for being aggressive. (Video via ITN)

But the spider doesn't always deliver a full dose of venom when it bites.

There are only 14 recorded deaths caused by the spider's bite going back to 1926, and they mainly pose a threat to children and the elderly. (Video via YouTube / Geoff McCabe)

A study found that over a 12-year period, out of more than 400 people bitten by the spider, only 2.3 percent actually needed antivenom to survive.

Plus this kind of incident has happened on multiple occasions in the U.K. and other parts of Europe over the years with only one reported bite — a Somerset man who had to be hospitalized but recovered.

So why the fear? Well there's the obvious, reaching-into-a-bushel-of-bananas-and-finding-a-giant-spider-instead thing.

Bananas are often their preferred residence in the wild, which is why they're so often swept up in the bushels and shipped overseas from their home in South and Central American rainforests. (Video via YouTube / Triple B)

But you could also make the argument that some outlets play up the scariness of the spider — the Daily Mail being a repeat offender — with headlines like, "World's deadliest spiders nesting on my banana from Sainsbury's."

As for the latest family affected by the wandering spider, they opted to spend the night at a friend's house, even after the spider was removed.