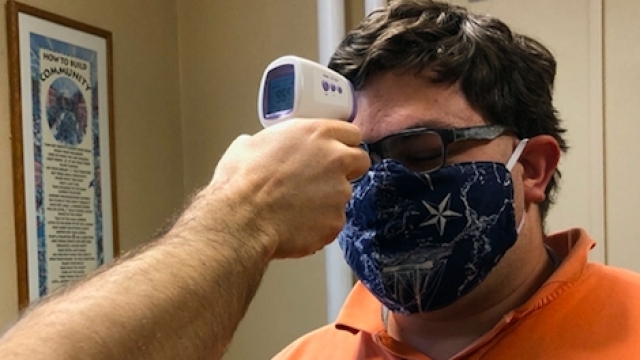 SMS
How COVID-19 Impacts Mental Health Patients In Group Homes, Therapy
By Lindsey Theis
By Lindsey Theis
April 29, 2020
COVID-19 has taken away one of the most powerful tools in the treatment of mental illness: community.
SHOW TRANSCRIPT

In this pandemic, no one is immune from anxiety and fear. But those of us facing daily dread for the first time can learn a lot from those who fight against it every day — people like Brian and James.

"Fear governs all my decisions. It governs every aspect of me. And for the first time in my life, the world is acting like I do on a daily basis," Brian told Newsy.

"I think people are coping fairly well. I mean, there's always somebody here to listen. And if you're kind of going out of your comfort zone, they might pull you back in," James said.

Brian and James spoke to Newsy from Karis, a therapeutic transitional facility for people with serious mental illness in Denver, Colorado. There’s no shortage of courage and resilience at Karis, but COVID-19 has taken away one of the most powerful tools in the treatment of mental illness: community. Before the virus, there were support groups, group therapy and group dinners. Now, so much of that has changed.

"A lot of folks that are getting sick are those that are in communal spaces and residential living places ... just knowing that if one person were to get sick, then there could be a spread."

Executive Director EJ Barklage, who is recovering from COVID-19 himself, says for now group therapy is out.

Face-to-face therapy: also out. Those family dinners now come with a 6-foot rule and a temperature check. The precautions are disruptive, but also comforting.

"It provides, a bit, a nice peace of mind at the same time, because we're like, you know, we are in such close proximity. Luckily, I haven't been here for any of it, but I hear that if one person falls ill, it tends to go around the house fairly quickly. So it's nice to have that extra reassurance," James told Newsy.

But the challenges are real. Self-isolation is a warning sign of decline in mood disorders like major depression, and staying connected, even if only online, is crucial.

"For me, at least, you know, if I am having a rough time and someone grounds me, it's nice to have an outside perspective from someone who can kind of understand closely what you're going through," James said.

Newsy asked James: "Do you still think you have that, or is it, like, harder to find sense than, you know, that the group interactions are way more limited?"

And for patients with a thought disorder like schizophrenia, tools to reduce isolation, like Zoom support groups, can actually make things worse.

"If you are struggling with being paranoid, it's really difficult, I think, to not meet face-to-face and have that visual contact. So we have had some folks in the community that have really — that has been really a challenge, make the switch to technology," Barklage said.

That struggle can be especially acute for severe patients reaching out for help for the first time. Dr. Eric French is the director of psychiatry at the Medical Center of Aurora, another in-patient mental health facility.

"Patients are concerned about being on a video. We usually try to say that, you know, I'm sorry that we're meeting for the first time this way. But, you know, still very much here with you. ... There's a lot that we can do for you. And, you know, sort of apologize for the interface, but reassure them that we can still function," French said.

But French is anticipating a spike in people seeking urgent care for mental health issues, and some of them will require in person therapy. And he’s getting ready.