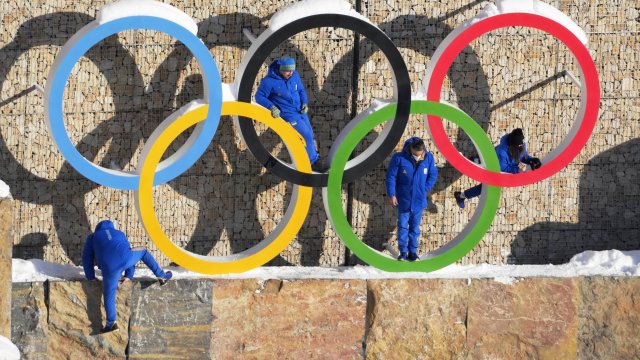 SMS
How China Has Changed Since The Last Time It Hosted The Olympics
By Newsy Staff
By Newsy Staff
February 14, 2022
President Xi Jinping has moved China in a more authoritarian direction since taking power in 2013.

Countries usually consider hosting the Olympics a great honor. It's a golden opportunity to showcase your country on the world stage and promote tourism and influence people in other countries.

But it can also be a costly — and sometimes even risky — challenge.

We're seeing all of that on display this month as the Winter Olympics unfold in Beijing. It's the second time China is hosting, having hosted the Summer Olympics in Beijing in 2008.

Those Games were a phenomenal success for China, which made a profit of over $140 million from hosting the Games. Ian Johnson, a China expert at the Council on Foreign Relations, points out those Games were a big step for China's "soft power" to influence people at home and abroad.

"Events like the Olympics are really important to the government in Beijing because you have to remember that the Communist Party didn't come to power through elections," said Ian Johnson, senior fellow for China studies at the Council on Foreign Relations. "Their claim to legitimacy is that they can deliver prosperity to Chinese people, which they have by and large been doing over the past few decades, making China wealthier and wealthier but also in giving China prestige on the international stage."

"It certainly began to change after the Olympics," Johnson said. "The person who would go on to win the Nobel Peace Prize, Liu Xiaobo, was picked up later that year, and ... the next year or so, 2010, they began to crack down on the internet.

When China first hosted the Games, it was a developing economic power on the rise. The international community had hope that bringing China into the fold could change its path and maybe lead to a move in the direction of democracy, with China signaling an openness to allowing some democratic freedoms. And while China faced accusations of human rights violations against dissidents and Tibetan separatists, those concerns didn't stop world leaders from attending the Games.

China has become a global economic power. Depending on which economic metric you use, it's either near the U.S. or surpassing it as the world's largest economy.

And President Xi Jinping has consolidated power and moved China in a more authoritarian direction since taking power in 2013.

Starting in 2019, China cracked down on pro-democracy protests in Hong Kong and consolidated power over it. The former British colony was supposed to maintain full autonomy until 2047, 50 years after it was passed to Chinese control.

But in 2020, China imposed a new national security law that effectively makes dissent illegal and removes most of the unique protections on civil rights that Hong Kong residents had.

Secondly, under President Xi, China has also targeted people of other ethnicities, including Tibetans, Mongolians, and perhaps most notably, the mostly Muslim Uyghurs living in the northwestern province of Xinjiang.

Over a million people, mostly Uyghurs, are being held in secretive internment camps that have allegedly been the site of rapes, abuse, torture and killings.

"To put it simply, we're facing genocide, and this is something that, you know, a lot of experts, international lawyers have also agreed on," said Zumretay Arkin, program and advocacy manager at World Uyghur Congress. "It's kind of become this open-air prison where really every single movement of labor people and other people are being monitored even in the privacy of their homes where, you know, Chinese officials are sent into their homes to monitor every single aspect of their lives."

Arkin hasn't seen some of her family for years because of the limitations placed by the Chinese government, and she worries the decision to have China host the Games again could lead to more repression in the future.

"I think in this context for the International Olympic Committee to not even consider taking into account the human rights record of the host country is a decision that should be really condemned by the wider international community," Arkin said. "Countries like China are going to use this as an opportunity to basically, you know, it's a propaganda show for them, for the Chinese government."

In early 2021, the Trump administration issued a formal determination that China committed "genocide and crimes against humanity" against the Uyghurs. The Biden administration has agreed, with Secretary of State Antony Blinken also describing China's actions against Uyghurs as a genocide.

A group of countries, including the U.S., U.K., Canada and Australia, didn't send officials as part of a diplomatic boycott tying to China's treatment of Uyghurs.

China denies all allegations of human rights abuses in the camps and had an Uyghur athlete participate in the torch lighting at the Opening Ceremonies, a move which has upset Uyghur rights advocates.

And finally, China has also faced international criticism for its handling of the early stages of the COVID-19 pandemic, which was first detected in the Chinese city of Wuhan.

All of this has put pressure on China to deliver a successful Games without major logistical or political issues popping up. Athletes have had to endure long and strict lockdowns after arriving as part of China’s "zero COVID" strategy.

And there's been a bit of rough sledding for these Games.

The Games were supposed to have full crowds, but crowds have been strictly limited after Beijing spotted its first case of the Omicron variant last month. Plus, countries have been worried about potential surveillance of their athletes.

The FBI told American Olympians to leave their cell phones at home and use a burner instead due to surveillance concerns, and the Committee to Protect Journalists issued a similar warning to reporters covering the Games from Beijing.