How Chameleons Could Help Save Madagascar's Rainforest 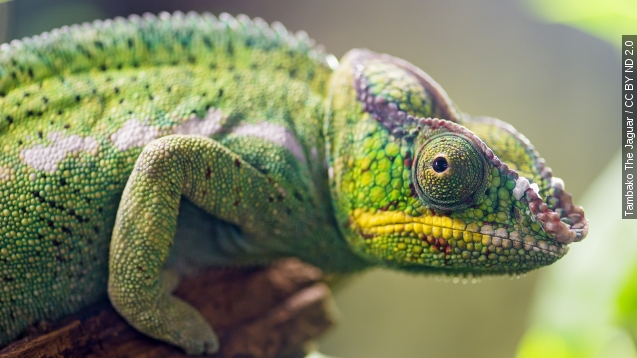 This little guy is a panther chameleon, native to the island of Madagascar. (Video via YouTube / Vadim Ledyaev)

Since they were first classified in the 19th century, science has grouped all panther chameleons into one species until now. (Video via Nature)

The chameleon's coloration was known to vary widely according to where on the island it was found, but new DNA testing suggests the different colorations actually represent different species — 11 of them, to be precise. (Video via BBC)

But the researchers' discovery goes beyond clarifying the chameleon's taxonomy: It's about preserving Madagascar's rainforests. (Video via American Museum of Natural History)

Madagascar has one of the most biodiverse ecosystems in the world, with a wide range of animals that can only be found there, most famously the lemurs. (Video via IMAX / "Island of Lemurs: Madagascar")

If the chameleons really are 11 different species, they characterize this diversity, because each is found only in certain parts of the Malagasy rainforest. (Video via Conservation International)

That rainforest faces the threat of deforestation, and while it's hard to measure, some estimates say as much as half of the island's forests have been felled since the 1950s, resulting in the extinction of nearly 10 percent of the island's species. (Video via Manchester Museum)

But that deforestation doesn't exist in a vacuum; it's driven by Madagascar's overwhelming poverty, with about 70 percent of the country's 22 million people living in poverty as of 2010. (Video via CCTV)

Some 80 percent of the country's population lives on subsistence farming, and that often means slash-and-burn agriculture, which can be devastating to the rainforest. (Video via Emory University)

So, in the face of that, what can a chameleon do? Well, chameleons are what the scientific community calls "charismatic."

While not everyone would agree they're cute — even though they clearly are — they do stick with you, and as such could help raise awareness of their rainforest's precarious position. (Video via Florence Ivy / CC BY ND 2.0)

This video includes an image from kuhnmi / CC BY 2.0 and music from Podington Bear / CC BY NC 3.0.