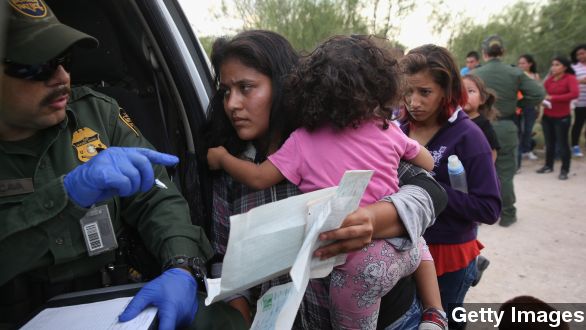 When thousands of undocumented minors were detained while trying to cross into the U.S., one CNN correspondent asked a border patrol official: (Via Getty Images)

"Would you describe it as a crisis?"
"I would say so."

And that reporter isn't the only one using the term.

"There's a growing crisis unfolding in the Southwest: Immigration officials are dealing with a surge of undocumented children crossing the border." (Via MSNBC)

"It is a huge humanitarian crisis on the border right now: a gigantic unprecedented surge of minors." (Via ABC)

"The growing humanitarian crisis at the border: There has been a surge of unaccompanied minors crossing into the U.S. illegally." ​(Via CBS)

The issue quickly gained national attention. President Obama called for action from a Congress slow to move on immigration reform while simultaneously taking criticism for not visiting the border himself. (Via Fox News)

All that while tens of thousands of minors — to borrow a phrase outlets love to use — were left in limbo. (Via The Washington Post)

But what about where the immigrants are coming from? How is the so-called "surge" being covered there?

Many of the immigrants come from Central America's "Northern Triangle," which consists of Guatemala, Honduras and El Salvador. (Via Google)

​Outlets there have extensively covered the wave of undocumented children, but the tone of their coverage tends to seem a little less dramatic, maybe because it didn't come as a surprise. (Via El Diario De Hoy, Siglo Veintiuno, El Heraldo)

And also worth noting — the issue isn't leading as many front pages there as you might expect.

As a columnist for Honduran newspaper Diario Tiempo wrote, the children are "just the tip of the iceberg." He argued they were the product of crushing poverty and wealth inequality in Honduras for which the country is ultimately responsible.

On the other hand, a headline in a different Honduran publication read, "[The United States] Should Protect The Immigrant Children." (Via La Tribuna)

A columnist for La Prensa Libre of Guatemala argued that the children crossing the border are breaking the law and asked how Guatemalan residents would feel if it happened there.​

Last week, President Obama met with the presidents of El Salvador, Guatemala and Honduras to discuss border policy. (Via The White House)

El Salvador's Diario Co Latino noted the meeting — during which the Central American leaders asked Obama for aid — was the first time representatives of the Northern Triangle had ever met with any U.S. president to specifically discuss immigration.

Meanwhile, House Republicans announced Thursday they had officially abandoned a vote on the border security bill.