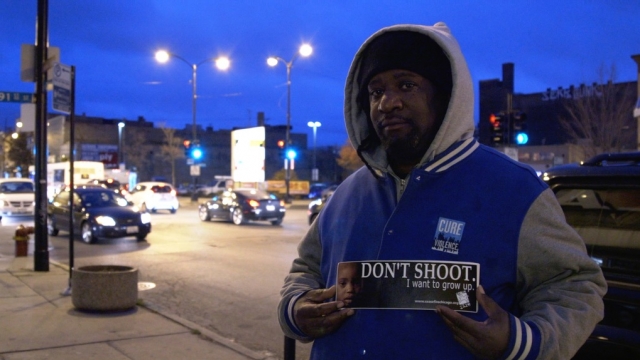 "You know I've been to more funerals than graduations? I can't even count the number of funerals I've been to," said Ulysses "U.S." Floyd, an outreach worker for CeaseFire Illinois.

Since the start of the year, more than 4,100 people in Chicago have been shot, and more than 700 have been killed.

SEE MORE: How Social Media Can Be Used To Stop Gang Violence

When asked about how bad gun violence was in years past, Floyd said, "It wasn't this bad. … I don't think it's ever been like this. … Everybody's getting shot now. Old ladies, babies, old men. Everybody."

Which is exactly why Floyd — a former gang member turned outreach worker — and other "violence interrupters" from CeaseFire are outside in near-freezing temperatures handing out literature.

According to Floyd, violence interrupters pass out literature in their assigned areas every day and canvass those areas as a team 2-3 times a week, weather permitting.

CeaseFire's violence interrupters were featured in a 2011 documentary called "The Interrupters."

The so-called interrupters use their personal connections and another of other on-the-ground tactics to stop shootings before they happen and prevent retaliatory attacks after someone has been shot.

"We hire people from the community, people that they know — credible messengers. They got relationships," Floyd said.

Clarence Ray, a violence interrupter, explains one tactic called buying time. Essentially, Ray explains that outreach workers might talk to a person for an extended period of time to stall them and dissuade them from making any bad decisions.

"All of us have been affected some kind of way by violence," Floyd said. "Friends, relatives, cousins."

But doing this work can be disheartening, especially in a year when there are more killings than usual.

"Yeah, I've had my lows sometimes when violence continues to happen," Floyd said. "But I have situations where I've seen we've stopped certain incidents, conflicts. We've saved lives, and that just … fires me back up, you know?"

To learn more about CeaseFire Illinois, a branch of Cure Violence, visit this website.