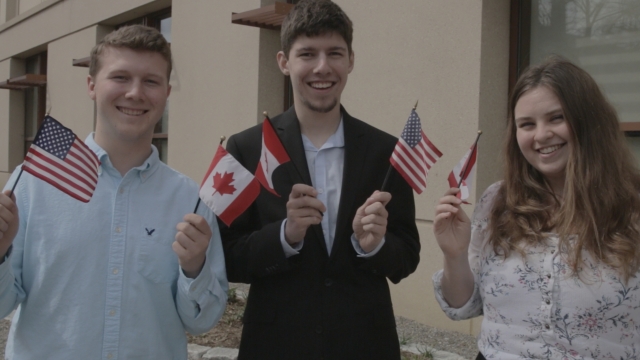 Canadian Prime Minster Justin Trudeau is pushing a liberal progressive agenda on climate change, refugees and gender equality. And young progressives in Canada — and in the U.S. — love him for it.

"I really support his agenda on climate change. Besides his looks, which is something very important as well."

"It's preposterous to think that a former snowboard instructor and nightclub bouncer could end up the prime minister of Canada, but ..." Canadian Prime Minister Justin Trudeau said.

So we're at American University here in Washington, D.C., to hear Canadian Prime Minister Justin Trudeau speak and really dig into this political progressive heartthrob status he's established. It's not The Beatles coming to America, but it's close.

"And with that, ladies and gentlemen, please join me in welcoming Prime Minister Justin Trudeau."

"I really hope that the U.S. follows some of the same policies, welcoming Syrian refugees in."

"Tonight they step off the plane as refugees, but they walk out of this terminal as permanent residents of Canada," Trudeau said.

"So down to Earth and so down to gender equality, open to calling himself a feminist."

"We should be afraid of the word 'feminist.' Men and women should use it to describe themselves anytime they want," Trudeau said.

"A cabinet that was gender-balanced. Why was that so important to you?"

That's not to say everyone likes Justin Trudeau. He definitely has opposition like any politician.

But in Canada and really throughout the world he's becoming an icon particularly for young progressives.

"Hear him speak, you look at him and you kind of sense President Obama in 2008."

"We've felt that there are a bunch of old white guys running the world, and we want to bring some fresh faces in."