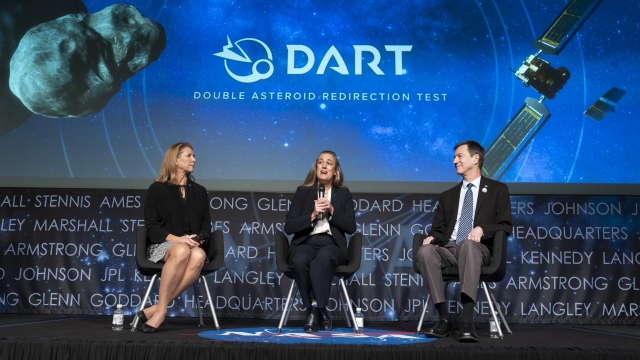 Sixty-six million years ago, a six-mile-wide asteroid slammed into what’s now the Yucatan peninsula at 40,000 miles per hour. The impact ignited wildfires across the world, created global tsunamis, and caused the extinction of three quarters of earth’s species – including the dinosaurs.

Now, most space objects burn up in the atmosphere and a few dozen tiny meteorites strike the earth every day.

It was a normal Friday morning in Chelyabinsk, Russia, in 2013, and then a meteorite that was about 50-feet a cross blew up in a fireball mid-air. The aftermath resulted in thousands of injuries, broken windows, and chaos in three cities over 200 square miles.

It's a reminder of the dangers lurking in our solar system. Hollywood has depicted the risks of space rocks in films like "Don't Look Up" in 2021. But how real is the threat? Space is mostly unbelievably empty.

But occasionally a wayward rock — what scientists call near Earth objects passes through our neck of the woods. Most are asteroids and a few are comets

On the moon, impacts from both over billions of years have left more than 100,000 craters. Venus and Mars have weathered their share of bombardment, but the sky above Earth offers some protection. When a piece of an asteroid or comet enters the atmosphere, it's called a meteor. Many are visible as shooting stars before they burn up completely. Most are smaller than a grain of sand. If a car-sized rock were to head our way, the Planetary Society estimates, the atmosphere would burn it up to the size of a microwave.

If a meteor actually hits Earth, it's called a meteorite. As many as 30 pebble sized ones strike the planet each day at an average speed of 12-miles-a-second. Meteorites the size of a house strike every few centuries. Every million years or so a mountain sized one makes an impact — like the 6-mile-wide rock that blasted Earth with the force of one hundred trillion tons of TNT, killing the dinosaurs 66 million years ago.

Telescopes on the ground and in orbit monitor near Earth objects, and authorities track more than 30,000 of them.

A third are bigger than 460 feet across, considered by NASA to be large enough to threaten the planet. Astronomers say no large asteroids are on course to strike earth for at least 100 years.

Sky surveys can miss asteroids with unusual orbits and the sun can obscure big rocks. In 2020, a car-sized asteroid called 2020 QG zoomed only 2,000 miles from Earth’s surface. Astronomers didn’t detect it until hours before it zoomed by at 11 miles per second.

Engineers are preparing to act if a deadly asteroid is one day headed for Earth.

In September, after a 10-month journey, NASA’s double asteroid redirection test, or dart, blasted directly towards a 560-foot-wide asteroid. The goal was to see if a direct hit would change the rock’s trajectory .

A second spacecraft nearby recorded the hit, helping confirm that the spacecraft had nudged the rock slightly off course.

While Dimorphos posed no risk to Earth, engineers say the test shows future missions could theoretically divert killer asteroids safely away from Earth. Hollywood will probably continue imagining the possibilities, while planetary defenders will keep their eyes on the skies making the universe just a little less dangerous than before.