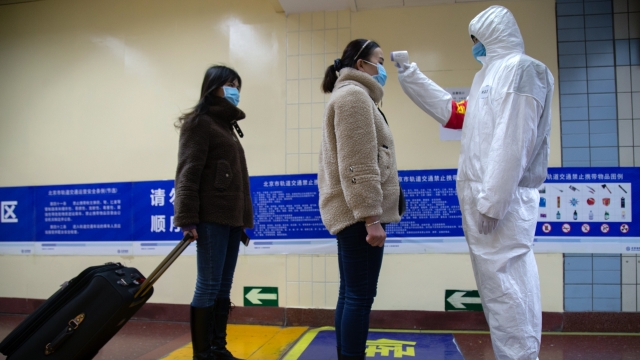 SMS
How Businesses Abroad Are Dealing With The Coronavirus Outbreak
By Cat Sandoval
By Cat Sandoval
February 28, 2020
Chinese, South Korean and Italian businesses are changing the way they work since the outbreak.
SHOW TRANSCRIPT

The coronavirus has already caused serious disruption to workplaces around the world. And we wanted to know how those countries are dealing with the outbreak, and whether American workplaces are ready for an outbreak here.

Let's begin where the virus started: China. In Beijing, workers must maintain a distance of 3 feet from other employees, and their work space must be at least 8 feet. Daily temperatures are taken and masks are required. There's also a rule against eating face-to-face. Working from home is encouraged.

Shane Olff is an American who teaches English in Beijing.

Olff: "It has impacted me greatly because I'm not working. The schools have been shut down, they have just discontinued or postponed classes until the ... outbreak has been, has been contained properly and it's quote-unquote 'safe' to continue to, you know, meet in public places."

Olff is located about 6 miles from the closest confirmed case, based on data from the Shanghai company CBNData. He still gets paid, but hasn't worked since mid-February.

Outside of China, South Korea has the largest number of confirmed coronavirus cases.

Shin: "People here are getting more nervous as this situation is getting longer."

Shin: "My company advised ... everyone to work from home for this week. And because we have one confirmed case in the building, so the building is now shut down for three days."

In Milan, Italy, the usual crowds have vanished. Schools, museums and cinemas are closed. Cafes and bars are mandated to closed at 6. Milan-based musician Tommy Kuti had to cancel his shows and is taking a big hit.

Kuti: "As an artist, our sector, I think, is the one who has seen [the] most impact with the virus. Because I guess if you have, like, a normal nine-to-five ... you stay home, you might still get paid or something. But, like, us ... I don't work the whole week. I only work for, like, those four or five shows in the month, and that's how you get by and that's how you get paid."

So how would America react if the CDC's warnings of an outbreak turn out to be true?Back in Chicago, it's still business as usual. A shutdown here could do enormous damage.

Baker: "The amount of loss will really depend both on the extent of the virus."

Economist Dean Baker of the Center for Economic and Policy Research tells Newsy that U.S. companies would face some tough decisions.

Baker: "Will companies make a decision to shut down because they're worried about the health risk? I'm sure many companies will be reluctant to do that."

Consumer spending, a huge part of the U.S. economy, could take a big hit — especially since so many workers do not have paid sick leave. After all, if you're not getting paid, you're not spending."