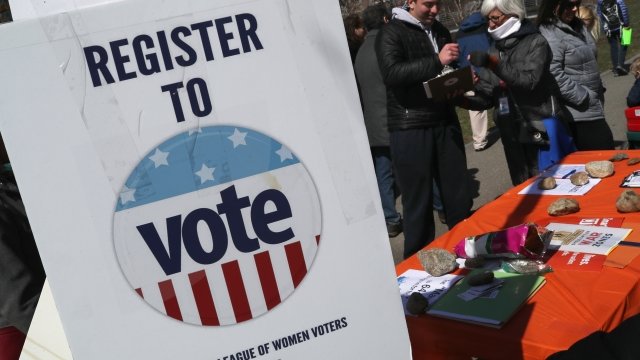 The influx of AAPIs in the South and in the suburbs could influence contentious political battle grounds.

Republicans make up the majority in both the House and the Senate, but that may change. As we inch closer to the midterm elections this November, the Asian-American and Pacific Islander, or AAPI, demographic could make a difference.

The AAPI population has been growing in the South and in the suburbs, and that could impact voting results. AAPIs make up about 6 percent of the U.S. population. Even though the demographic is smaller in size than whites, Hispanics and blacks, Asians are the fastest-growing minority group.

He said his administration will "counteract" attempts to interfere and encouraged states keep paper backups in upcoming elections.

Alton Wang is the assistant director of AAPI Data, which studies and provides demographic information on Asian-Americans and Pacific Islanders.

The growing Asian-American population is especially significant in swing states like Virginia. And the population is growing five times faster in suburbs than cities. Why is this important? Some experts are calling the suburbs the "central battleground of American politics" because the majority of the electorate lives there.

Students Register Voters At March For Our Lives

These protesters won't be old enough to vote in November, but they worked Saturday to get others registered.

Despite the population increase, Asian-American voter turnout remains low. Wang said it's due to lack of access to polls, language barriers and lack of engagement among politicians. Asian-American votes may be tough to ignore as AAPIs demographic have the highest median income — which makes them viable campaign donors.