Former Sen. Bob Dole Had A Lot To Do With Trump's Call With Taiwan 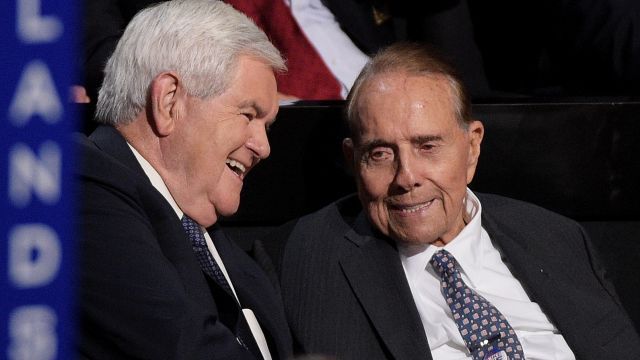 SMS
Former Sen. Bob Dole Had A Lot To Do With Trump's Call With Taiwan
By Jake Jones
By Jake Jones
December 6, 2016
Bob Dole lobbied Donald Trump's campaign in favor of improved relations with Taiwan, and he made money doing it.
SHOW TRANSCRIPT

Bob Dole might have had a big hand in setting up the phone call between President-elect Donald Trump and the president of Taiwan.

Dole's lobbying included orchestrating meetings between the campaign and Taiwanese officials, making sure Taiwan had representatives at the RNC and tipping the platform to be the most pro-Taiwan agenda ever.

Despite Trump's repeated campaign pledge to reduce the influence of lobbyists in D.C., Dole's work seems to have paid off. Trump has reportedly ignored most of the advice from the State Department on Taiwan.

This cozy relationship between Republicans and Taiwan isn't a new phenomenon. Taiwan spends about $2 million a year lobbying the U.S. government.