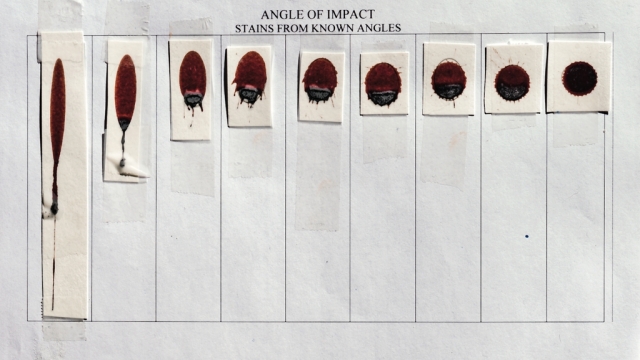 SMS
Bloodstain-Pattern Analysis Is 'More Subjective Than Scientific'
By Jamal Andress
By Jamal Andress
April 12, 2019
Despite its widespread use, the National Academy of Sciences says bloodstain-pattern analysis "has serious problems" and "is not based on science."
SHOW TRANSCRIPT

It’s one of the most popular crime drama devices there is: bloodstain-pattern analysis. Recreating the crime with what the victim left behind.

But the accuracy of this practice is beginning to face increased scrutiny as DNA exonerations and scientific investigations call its reliability into question.

After a three-year investigation, the National Academy of Sciences concluded bloodstain-pattern analysis "has serious problems" and is "more subjective than scientific."

Despite all that, this six-decade-old practice is still being heard by prosecutors, judges and jurors in courtrooms across the country.

Pamela Colloff is a writer for the New York Times Magazine and ProPublica. Her award-winning piece "Blood Will Tell" explores how faulty forensic science is still a staple of the criminal justice system.

"How is it that this sort of unproven science took root in the criminal justice system and then persisted for decades? … Judges weren't looking at the science, they were looking at what other judges had said, so it's like this terrible game of telephone," Colloff said.

"We discovered in looking at a lot of these cases that your average judge, like your average juror or your average reporter, doesn't have a science background. He or she is not reading scientific journals in his or her spare time. And so what they're doing is they're paying attention to precedent, and what other judges have ruled in other cases," Colloff said.

The central figure behind Colloff's "Blood Will Tell" piece is Joe Bryan, a high school principal convicted of killing his wife. His conviction was held together in large part by the "expert" testimony of a police officer who took a 40-hour course on bloodstain-pattern analysis. That same officer ultimately signed an affidavit admitting his analysis was wrong while Bryan continues to serve a life sentence.

Prompted by Joe Bryan's case, the Texas Forensic Science Commission, a crime lab watchdog for the state, now has an accreditation requirement for bloodstain-pattern analysis experts in Texas.

"My takeaway from this case, like so many cases I've looked at, is that there can be a mistake that's made really, really early on in the investigation and it's really hard to undo that. … I'm always struck by how hard it is to undo a mistake in the criminal justice system, whether it's a bad call in the investigation, or something doesn't go right at trial. Once that conviction is in place, it's almost impossible to get it undone," Colloff said.