How Big Of A Deal Is Ben Carson's GOP Straw Poll Win? 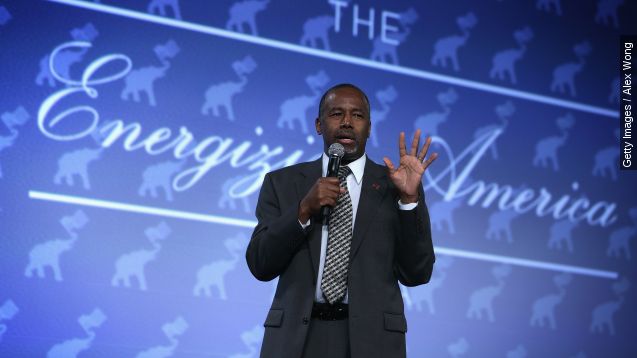 SMS
How Big Of A Deal Is Ben Carson's GOP Straw Poll Win?
By Matt Moreno
By Matt Moreno
May 24, 2015
Ben Carson's win at the Southern Republican Leadership Conference speaks volumes for the underdog candidate, but there's still plenty of time.
SHOW TRANSCRIPT

While he may not be the biggest name vying for Republicans' presidential votes, Ben Carson is forcing his way into the conversation.

"God bless you, and God bless the United States of America," Carson told a crowd while announcing his presidential campaign.

The former surgeon beat out the rest of the GOP field at the Southern Republican Leadership Conference on Saturday, winning 25.4 percent of the straw poll vote. He was followed by Wisconsin Gov. Scott Walker at 20.5 percent and Texas Sen. Ted Cruz at 16.6 percent. The 14 other candidates polled at or below 5.3 percent.

The SRLC poll is commonly referred to as one of the first major indicators of the party's front runners for the upcoming presidential election — that's why the man who has no political experience sitting atop the polls is a bit surprising.

But as Politico notes, "The straw poll victory doesn't necessarily represent a breakthrough for Carson." The outlet says Carson, along with Cruz, "mounted serious efforts" toward the straw poll voters while some other candidates didn't even participate.

NBC, on the other hand, had a more positive outlook on the results for the doctor, saying, "Carson's win comes despite the fact that his address came late in the weekend's events, indicating that many of his fans came prepared to vote for him."

Carson's lack of political experience and strong views against same-sex marriage could make or break his campaign.

While it's certainly not the end-all, be-all, the SRLC poll atleast gives us some measurement of who's who in the Republican race.

In 2010, eventual Republican presidential nominee Mitt Romney beat out Ron Paul by a vote at the conference, both polling 24 percent. They were followed by Sarah Palin and Newt Gingrich with 18 percent of the conference's votes.

Seventy-five percent of the voters at the conference, held in Oklahoma City, were from the state of Oklahoma.