Next Ill. Governor Has To Address The State's Major Violence Issue 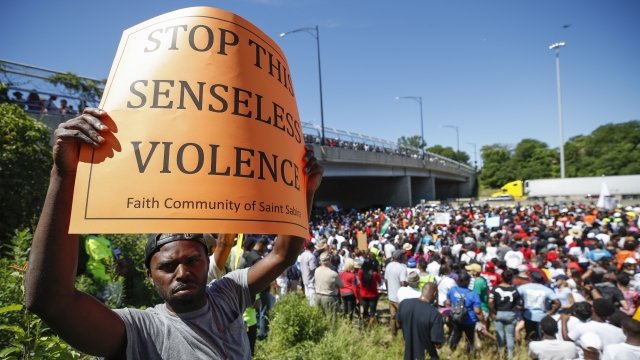 SMS
Next Ill. Governor Has To Address The State's Major Violence Issue
By Casey Mendoza
By Casey Mendoza
July 11, 2018
Illinois' next governor needs to address the state's violence problem. So how do the candidates plan on doing that?
SHOW TRANSCRIPT

Protesters shut down a major Chicago expressway this month to shed light on crime, poverty and gun violence in Illinois. Those issues were well-known before the protests, but the debates surrounding them are heating up again — and just in time for the state's fervid race for governor.

Governor and Republican incumbent Bruce Rauner criticized both the protesters and Chicago Mayor Rahm Emanuel for what he referred to as "chaos." Emanuel fired back, saying the protest was peaceful, while other critics blamed Rauner's own policies for part of the violence problem in Illinois.

A senior reporter for The Guardian pointed out that it was Rauner's 2015 budget standoff that led to major cuts in violence intervention programs, mental health services and summer jobs programs, which can help curb youth violence.

It's not yet clear whether the cuts impacted violence in Illinois, and last summer one of the violence prevention programs did get its funding restored to $4.6 million.

Whatever the effect of recent budget cuts, the issue of gun violence remains. As of July 9, the number of people shot in Chicago this year surpassed 1,400 — but that's still lower than 2016 and 2017. 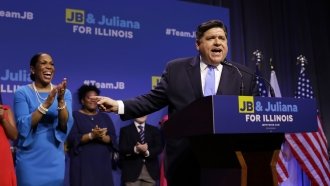 This Could Be The Most Expensive Governor's Race In The US

Democratic candidate for governor J.B. Pritzker sees the issue as a "public health epidemic." Back in January, the candidate told The Associated Press he would curb gun violence by increasing "access to mental health and social services" and imposing certification requirements on gun dealers.

That second idea to regulate gun dealers has actually been floating around the Illinois statehouse for the past couple months, but Rauner vetoed the measure and called it "onerous bureaucracy." A second draft of the legislation is back on Rauner's desk, but it's not clear if the governor will sign it.

Instead, in a press conference following the expressway protest, Rauner blamed Illinois state Democrats for failures in public safety. Back in May, the governor proposed a comprehensive gun bill that would ban bump stocks, impose a 72-hour waiting period on all firearm purchases and reinstate the death penalty for mass murderers and people who have killed police officers.

That bill died in the House chamber, but activists are still searching for solutions to the issue of gun violence. Rev. Michael Pfleger, who organized the march on the Chicago expressway, said, "Today, we got their attention; now, we want action."