How An Inclusive Church Works To End Black Queer Violence 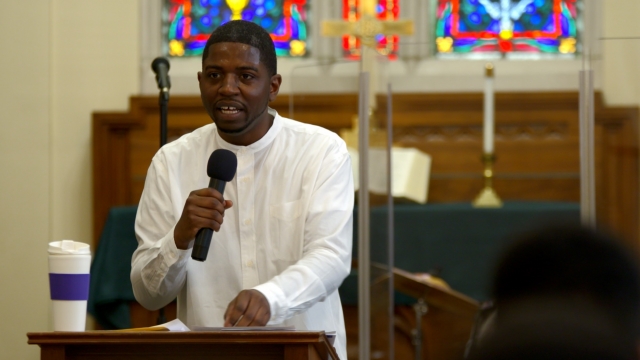 "The Lighthouse is a predominantly African-American LGBT-inclusive church that welcomes all people. … We wanted a worship setting that had the black church ethos."

"What is it that you all are trying to do here at Lighthouse?"

"We wanted a place which was unashamed and unapologetic about its rich and full and wide embrace of LGBT folks. And also we want to place that was open to all."

News of an alleged attack against actor and musician Jussie Smollett resonated with the congregation whose members sit at the intersection of the groups most vulnerable to hate crimes: black people and queer people.

According to the most recent FBI data, more than 75 percent of reported hate crimes in 2017 were motivated either by race or sexual orientation. And regardless of what actually happened to Smollett, there are very real dangers for black queer people in Chicago and across the country. They were two of at least 26 trans women who were killed in the U.S. in 2018, according to the Human Rights Campaign.

"There are plenty of examples of violence against black bodies that are authentic."

Crimes against transgender people can be tough to track for a number of reasons, including the possible misgendering of the victims, but Pastor Frazier says the first step to addressing these killings is clear:

"We need to lift up their names. We need to speak their names. And we need to talk about the homophobia and the racism which led to their murders in the first place."

They do this by partnering with other organizations to better the lives of Chicago's black queer community.

For example, Lighthouse holds service inside St. Paul's United Church of Christ, a part of a predominantly white Christian denomination. This partnership allows Lighthouse to worship in a safe space while educating the surrounding community on the plight of black Chicagoans.

Here's Pastor Frazier marching alongside St. Paul's members, both bringing awareness of gun violence in Chicago. If you're looking for the intersectionality, consider this: a predominantly white church, a black queer church and an anti-violence group marching together to denounce gun violence.

"I fundamentally believe that we are stronger together."