How America Is Both Threatening And Helping African Lions 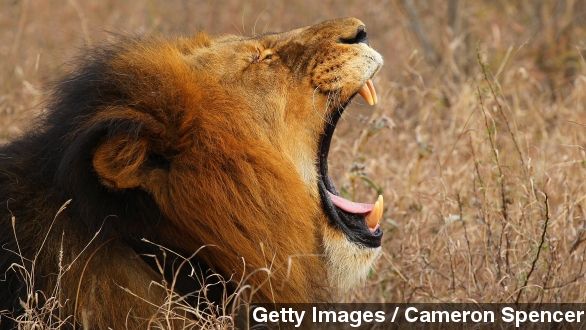 SMS
How America Is Both Threatening And Helping African Lions

The African lion is in danger of extinction in the foreseeable future.

That's according to a press release from the U.S. Fish and Wildlife Service, which is pushing for the lion to be listed as threatened.

The push comes in light of the decline in lion numbers and habitat as well as a decrease in prey due to human hunting, which has brought the lions into conflict with humans. (Video via National Geographic)

As The Washington Post notes, the move could bring lions — whose numbers have decreased by 30 percent over the last 20 years — closer to the rest of the big cats, such as leopards and tigers, all of which have endangered status.

The biggest factor in their decline will be familiar to anyone who's read about other threatened species.

KEVIN RICHARDSON VIA GOPRO: "Talk about any species, you've got the same dilemma — habitat loss. Habitat, habitat, habitat. Even large reserves like us, the area's not big enough."

The report from the Fish and Wildlife service pointed to the fact that lions currently inhabit only a little more than 20 percent of their historical range.

But observers expect the move to designate the big cat as threatened will do more to curtail a different threat — trophy hunting.

With this designation, hunters could still kill lions but only bring them back to the U.S. as trophies with permission from the government in the form of permits. (Video via The Guardian)

JEFF FLOCKEN VIA PBS: "Americans responsible for over 60 percent of all African lions killed for sport in Africa. This new system will help to monitor and regulate how these trophies come back into the U.S."

The service plans to publish the proposed rule to designate lions as threatened on Oct. 29.