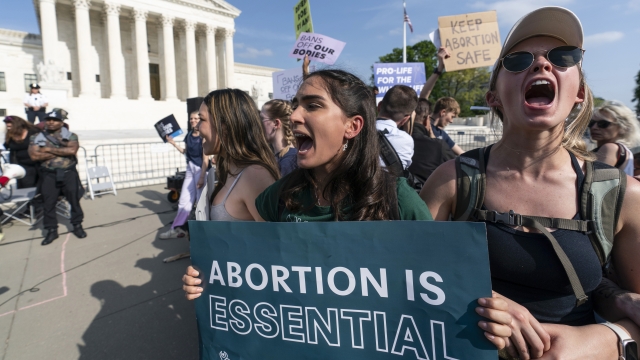 SMS
Court's Decision On Abortion Rights Will Impact States Differently
By Jamal Andress
By Jamal Andress
May 4, 2022
Some states have have trigger laws in place, while others have pre-Roe abortion bans still on the books.

After a Supreme Court decision overturning the federal right to abortion guaranteed in Roe v. Wade, the focus now turns to individual states that could soon have complete control of abortion rights for their residents with little to no federal oversight.

Before Roe v. Wade became the law of the land in 1973, 30 states outlawed abortion. Now, at least 20 states are poised to ban the practice.

States like Tennessee, Kentucky, Texas and several others have trigger laws that immediately institute an abortion ban.  Other states like Wisconsin, Michigan and Arizona have pre-Roe abortion bans still on the books that could potentially go into effect without action from local lawmakers.

Jill Adams, the CEO of Lawyering for Reproductive Rights, told Newsy some prosecutors and law enforcement have criminalized abortion.

"We have seen investigations, arrests, even prosecutions in the majority of states … overzealous prosecutors are treating the criminal code like a grab bag," Adams said. She says more often than not, appeal judges throw these cases out but by then damage has been done.

Meanwhile, many deep blue states across the country are pushing the opposite direction — codifying Roe in state law.

"Abortion will always be safe and legal here in Illinois," Gov. J.B. Pritzker said, before the Supreme Court's June 24 decision.

New York Gov. Kathy Hochul tweeted: "For anyone who needs access to care, our state will welcome you with open arms. Abortion will always be safe & accessible in New York." Followed by neighboring Gov. Phil Murphy adding that "access to reproductive health care remains available to anyone who needs it in New Jersey."

Back in April, Colorado codified into law access to abortions statewide.

With Roe v. Wade overturned, the Guttmacher Institute says the average American may eventually have to travel about 125 miles to reach the closest abortion provider, up from an average distance of 25 miles.