How An NYC Performer Got Prince William's Number 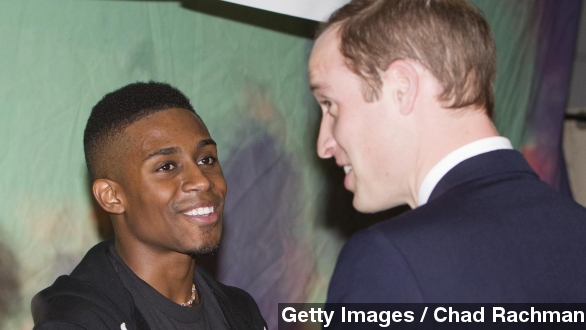 Prince William and Princess Kate are taking names and handing out phone numbers. Maybe it's something in the American water.

The royals were watching 22-year-old Steven Prescod perform in a piece where he told a story about how he was jailed for assault, but then turned his life around.

And although they don't seem too emotional over the performance in this ABC footage, they apparently were very impressed.

People reports the prince said he was nearly brought to tears, its headline reading the Duke and Duchess were "blown away."

So much so, that Prince William even went as far as to give Prescod his phone number. Whaaaaaaaat.

"He's a very just down-to-earth guy and it was really great just actually standing there and talking to him," Prescod says.

Will and Kate met Prescod at a youth development program, which had dance and storytelling. After that, they were off to an event that celebrated other British people who made it in New York, and then sightseeing. (Video via CNN)

But everyone is talking about the number. We wouldn't be surprised if people are trying to buy those digits off Prescod.

"So what do you do? Just text the prince?" a Fox News reporter asks.

"He offered to help Steven bring his show to a bigger audience," an HLN reporter says.

Unforgettable. Among other things, we're also secretly hoping they left with a better understanding of coffee over tea.