How A Hybrid 17th Century Camel Skeleton Ended Up In Austria 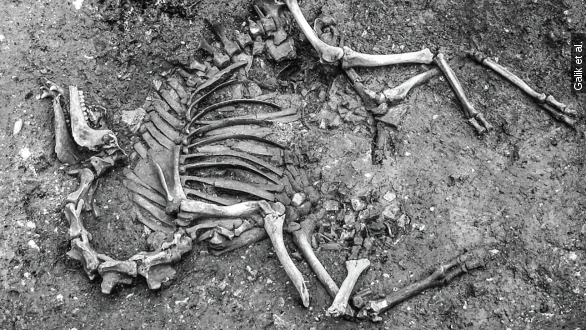 If you know anything about camels, you know they have humps. (Video via YouTube / Chris Thompson)

And if you know more than anything, you know some have one hump and others have two humps.

When you breed these together you get a hybrid, like this skeleton researchers have uncovered in the middle of Austria — well outside of either camel's natural range.

Not just that: This camel is more than 300 years old.

So how did a hybrid camel from the 17th century end up almost completely intact, buried in a basement in Central Europe? Basically, the Ottoman Empire.

By the 17th century, the Ottoman Empire had been around for hundreds of years and was nearing its greatest extent, with Ottoman troops fighting in Europe and even laying siege to Vienna in 1683.

The researchers theorize the Ottomans brought the camel through the town of Tulln, near Vienna, where it stayed, possibly as an attraction, until it died. (Video via Google)

The Ottomans used camels for mounted combat through the early 20th century, and the researchers say hybrid camels were especially strong and large.

The paper, published in PLOS One, says this skeleton is the first confirmed evidence of this specific hybrid breed.

Lost breeds are common among domesticated animals, especially horses — many documented medieval breeds have since been lost through crossbreeding and mixing bloodlines. (Video via U.S. Bureau of Land Management)