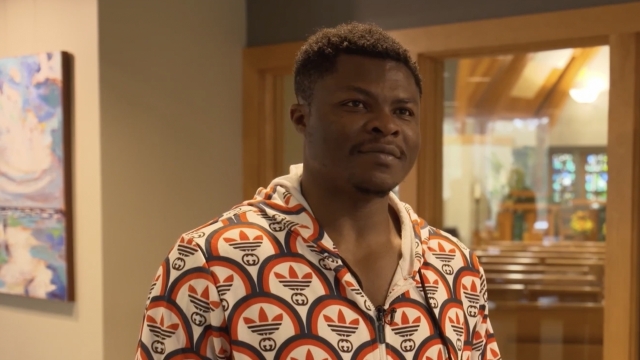 SMS
Cameroonian Man Wins Asylum Case, Finds Safe Haven In Wisconsin
By Ben Schamisso
By Ben Schamisso
September 21, 2022
Many Cameroonians have had to flee their country due to ongoing violence threatening their lives. One man describes his journey.

On a Sunday morning at a church in Madison, Wisconsin, a Cameroonian immigrant feels at home despite being thousands of miles away from his loved ones.

Ngwa Augustine says he owes his life to this community, especially the two people sitting next to him: Toni and Mark Swandby.

He calls them his American parents.

For nearly three years, they've been living under the same roof.

In late 2019, the Swandbys decided to open their house to this asylum seeker they had never met.

"I said, should we have some guy from Cameroon come and live with us?" said Toni Swandby. "He said, 'Well, there's no reason why we can't. I mean, it's just us. We got all this room.'"

Augustine had just been released by ICE from federal detention and needed a place to stay while his asylum case inched its way through the system.

After the incredible hardships he had experienced in his life, meeting the couple and getting a free bedroom was a huge relief.

"It was just magical. It was just something I can't really explain, the happiness I felt at that time. There was hope," said Augustine.

In Cameroon, Augustine says he was twice arrested and beaten by local authorities after he demanded more rights for the country's Anglophone minority. 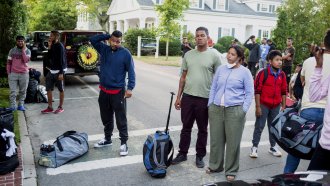 "I was tortured, we were being tortured every day. A lot of people died," he said.

One day, after he passed out from the torture, guards dumped him on the street, thinking he was dead.

When word got out that he survived, Augustine fled without saying goodbye to his wife.

"I couldn't see her because they were looking for me," said Augustine.

He escaped north to Nigeria but felt unsafe because Cameroonians were getting arrested.  So he flew to Ecuador, a country with lax visa rules.  From there, he trekked for months across eight countries all the way to the U.S. border.

Despite restrictive Trump administration policies, Augustine was allowed to enter the U.S. in July 2019.

"I found myself in front of the Americans and I said 'OK, hello, good, this is my name, I am a Cameroonian and I'm seeking political asylum," he said.

He passed a credible fear screening, successfully arguing he faced real danger back in his home country and had a "significant possibility" he could win a full asylum hearing.

When he was transferred to a Wisconsin ICE jail, his life was changed by what he calls a miracle.

Maggie Morris, a University of Wisconsin law student, met Augustine in detention as part of a class with the immigrant justice clinic.

"I think my eyes immediately got teary. It's not the kind of story you hear every day when you're doing intakes," said Morris.

Morris and her professor, Erin Barbato, instantly decided to represent Augustine for free — which was a game changer, as it's extremely difficult  to win asylum without representation.

Barbato says two factors helped Augustine's case: He had been persecuted by his own government, due to his political opinions. He checked the boxes to qualify for asylum under American law.

"And he had a very kind demeanor that would be welcoming for the students to work with," said Barbato.

The students quickly got him out of detention on parole.

And Barbato asked a friend at the Midvale Community Lutheran Church if they could find him a place to stay. That connected him to the Swandbys.

Augustine won his asylum case in September 2021, two years and two months after he first stepped foot in the U.S.

Now he has one last goal: bringing his wife and his 5-year-old daughter here to his new home. He hasn't seen them in four years.

But when it comes to the backlogged immigration system in the U.S., nothing is moving too swiftly.

So without a clear timeline, Augustine is waiting for the day his American family and his Cameroonian family can all be by his side, safely in the United States.