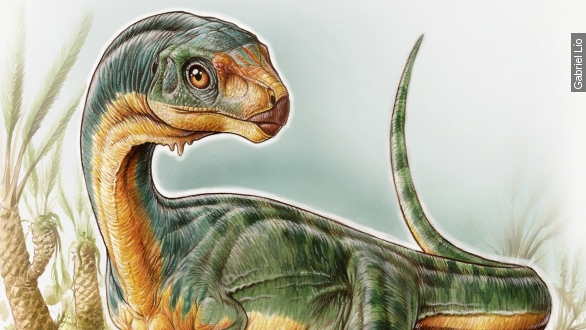 It's not every day a seven-year-old discovers a dinosaur. Obviously that would be ridiculous.

But 11 years ago, Diego Suarez did exactly that, and the dinosaur he discovered could prove to be pretty significant.

Suarez was out on a dig in southern Chile with his parents, who are both geologists, when he found the fossil of the animal that would be named Chilesaurus diegosuarezi in his honor. (Video via Google)

In the intervening years a group of researchers, including Diego's parents, have worked to classify the odd-looking, snub-nosed dino, and what they've found is interesting to say the least.

Chilesaurus is a member of the clade Tetanurae, which means it's a theropod, and a distant relative of Tyrannosaurus rex. (Video via National Geographic)

Steve Brusatte is a paleontologist at the University of Edinburgh who's done extensive research on theropods.

But aside from being much smaller than its famous, meat-eating cousin, Chilesaurus has another major difference: it was probably a plant-eater.

And that means that discovery 7-year-old Diego made 11 years ago represents a brand new group of dinosaurs: plant-eating theropods from South America.

"I hope this is really just the tip of the iceberg, and there's a whole lot more discoveries from this time period in South America that will tell us more about different dinosaurs living all around the world at that time," Brusatte said.

You can see the researchers' findings in the journal Nature.