How 3-D Printing Is Revolutionizing Medicine 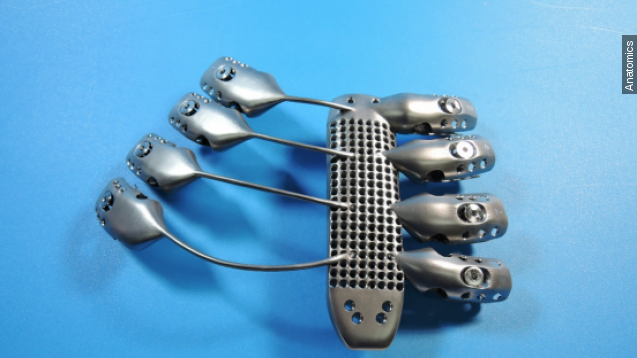 Last week, a Spanish man received the world's first customized, 3-D printed titanium ribcage after doctors had to remove a large portion of his sternum due to a cancerous tumor.

And 3-D printing is quickly becoming a favorite for medical researchers. It makes life a lot easier for the ribcage's new owner as well as the doctors who implanted it.

"it needed to be customized exactly to suit the patient. No human body is the same so therefore every implant is going to be different," a researcher at Commonwealth Scientific and Industrial Research Organisation said.

Some implants are made without measuring the patient, so they don't always fit well, which can cause complications down the road.

But customizable prosthetics — and 3-D printed ones in particular — have allowed researchers to take major steps forward.

"The 3-D printing works by inputting a 3-D digital CAD file into a computer. ... The machine puts down layer upon layer of material and each layer is fused ... you then start to build up a product as your layers increase," explained the researcher.

This ribcage could be one of the first few snowflakes in an avalanche of new 3-D printed medical technology.

Fabricated prosthetics were the first choice for early adopters of 3-D printers. And last month, the FDA approved the first ever 3-D printed pill, which its designers claim can deliver a higher dose of medicine and dissolve quicker.

Scientists are even working on fabricated organs, although it's not quite to the point where you hit a button that says "kidney," and the printer gets to work. Instead, the 3-D printer builds up a structure and places a patient's cells along that structure, allowing the cells to do the actual work of making a new kidney. (Video via Wake Forest Baptist Health)

With all the new possibilities, companies are sure to keep churning out 3-D printed products, as long as the money is still there. Nature reported printed body parts were a half a billion dollar industry last year alone.

This video includes images from Anatomics and Getty Images.