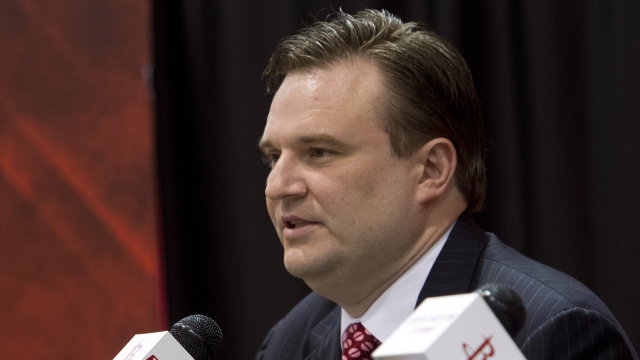 SMS
Houston Rockets Face Backlash From China After GM's Hong Kong Tweet
By Briana Koeneman
By Briana Koeneman
October 7, 2019
It all started over the weekend, when Daryl Morey posted an image on Twitter that read, "Fight for freedom, stand with Hong Kong."
SHOW TRANSCRIPT

The general manager of the Houston Rockets is apologizing for a tweet that caused an uproar among the team's Chinese fans and sponsors.

It all started over the weekend, when Daryl Morey posted an image on Twitter that read, "Fight for freedom, stand with Hong Kong" — a slogan frequently chanted during the city's pro-democracy protests.

Here's the problem: Many people in China see the Hong Kong protests as unpatriotic and violent. And even though Morey deleted the tweet pretty quickly, it set off a firestorm of backlash across the country.

The Rockets have been effectively banned from China's main broadcasters. Chinese sponsors put their deals with the team on hold. Online retailers yanked Rockets merchandise off their platforms. And the Chinese Basketball Association said it would suspend all cooperation with the team.

That's bad news for the Rockets, who have been the most popular NBA team in China for years. Morey and the NBA both issued apologies for the tweet to try and diffuse the situation.

But back in the U.S., several lawmakers — including former Texas Rep. Beto O’Rourke — criticized the league for going soft on China and trying to silence Morey.