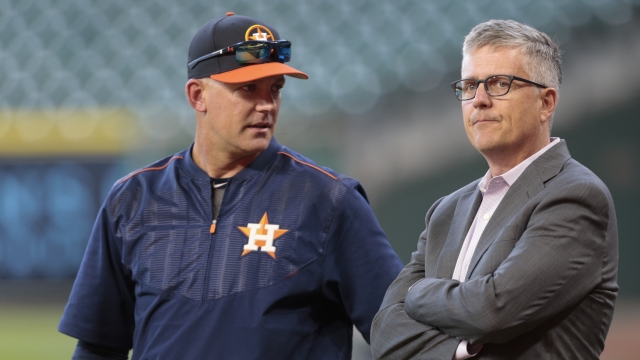 SMS
Houston Astros Fire GM And Manager For Sign-Stealing
By Gage Jackson
By Gage Jackson
January 13, 2020
Both managers were fired for their involvement in a cheating scandal during the Astros' 2017 championship season.
SHOW TRANSCRIPT

They were let go just moments after the MLB announced their suspensions following an investigation into alleged sign-stealing during the team's 2017 championship season.

The investigation involved dozens of witnesses, including current and former players. It confirmed the Astros had used hidden cameras to steal opposing team's signs throughout the regular season and playoffs.

The MLB only suspended Luhnow and Hinch without pay for the 2020 season, but Astros owner Jim Crane took it a step further, saying, "We need to move forward with a clean slate."

"Stealing" the signs used between the catcher and pitcher is pretty common in the MLB, but using technology to do so is considered tantamount to cheating.

MLB Commissioner Rob Manfred says the Astros used a center-field camera to transmit the opposing team's signs to their dugout. The team would watch the camera live and then bang on a trashcan to signal to the batter which pitch was coming.

Manfred's summary said even though the scheme was "player-driven," no players would be disciplined.

The league's also investigating Boston Red Sox manager Alex Cora for allegedly using similar cheating tactics in 2018. Cora was the Astros' bench coach during the 2017 scandal and is expected to receive a similar punishment.

The Astros are still tied with the Los Angeles Dodgers for the second-best odds to win the 2020 World Series. The New York Yankees are favorites.

The Astros have also been fined $5 million and will forfeit first- and second-round draft picks for the next two seasons.