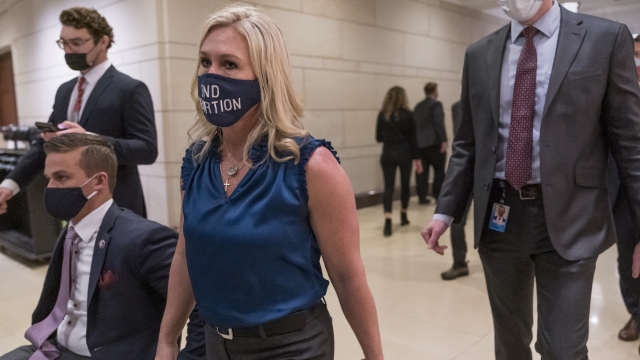 Minority Leader Kevin McCarthy declined to take action against another congresswoman who has faced criticism.

That's prompted the House to vote today on whether to remove Rep. Marjorie Taylor Greene from her committee assignments.

In a statement, he said, "As a member of Congress we have a responsibility to hold ourselves to a higher standard than how she presented herself as a private citizen. Her past comments now have much greater meaning. Marjorie recognized this in our conversation. I hold her to her word, as well as her actions going forward."

But he criticized Democrats for bringing the resolution to the floor, calling it a distraction.

She says Greene's removal is necessary.

"She remains a clear and present danger to our democracy. Congresswoman Greene's support for violence, pattern of stalking and intimidation, continued and unending pattern of appalling viciousness, lies and racism both before and after her election, is what helps fuel domestic terrorism like we have all just witnessed up close," said Wasserman Schultz. "Her statements and actions bring shame on the entire House of Representatives and have fomented divisions within Congress and the United States as a whole."