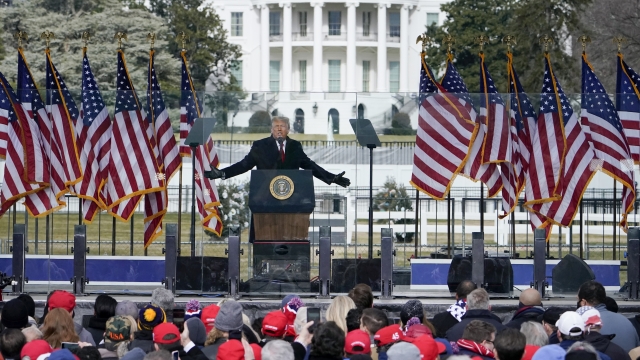 The House of Representatives voted to impeach President Donald Trump again, making him the only U.S. president to be impeached twice.

"He must go. He is a clear and present danger to the nation we all love," said House Speaker Nancy Pelosi.

All Democrats and 10 Republicans voted in favor of one article of impeachment for incitement of insurrection. The charge stems from President Trump's fiery Jan. 6 speech to his supporters shortly before riot at the U.S. Capitol. The resolution also notes his phone call to Georgia's Secretary of State where the president asked him to "find" more votes.

"The president saw the insurrectionists not as the face, the foes of freedom as they are, but as the means to a terrible goal — the goal of his personally clinging to power," said Pelosi.

The impeachment article says, "He threatened the integrity of the democratic system, interfered with the peaceful transition of power, and imperiled a coequal branch of Government."

A few Republicans did vote to impeach the president, but his GOP allies in the House criticized Democrats for pushing through a partisan impeachment with just days left in President Trump's term.

"This doesn't unite the country. There's no way this helps the nation deal with the tragic and terrible events of last week that we all condemn. And Republicans have been consistent. We've condemned all the violence all the time," said Rep. Jim Jordan.

President Trump was previously impeached in December for abuse of power for asking Ukraine to get involved in the U.S. election. He was also impeached for obstruction of Congress for telling his administration to ignore subpoenas.

After a trial in the Senate, the upper chamber voted to acquit.