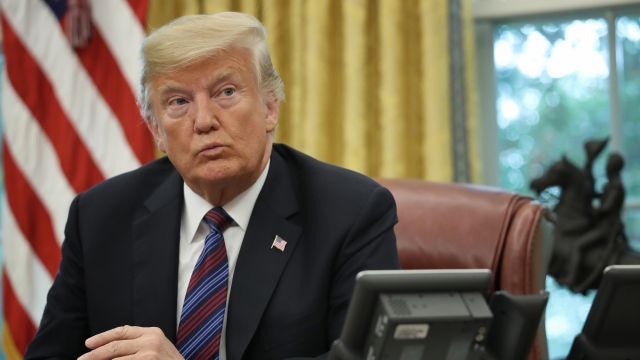 The House Intelligence Committee voted to approve the impeachment inquiry report on President Donald Trump and Ukraine on Tuesday. The report, which was made public Tuesday, now heads to the House Judiciary Committee, which will consider articles of impeachment against the president.

"This is not about Ukraine," Schiff said. "This is about our democracy, this is about our national security, this is about whether the American people have a right to expect that the president of the United States is going to act in their interests with their security in mind and not for some illicitly personal or political reason."

President Trump is accused of improperly asking Ukraine to investigate political rival Joe Biden and his son. Democrats are trying to make a case that the president used military assistance and a White House meeting as leverage. The investigation was sparked by a whistleblower complaint.

The report details the committee's findings from both public hearings and closed-door interviews and makes a case for impeachment.

The 300-page writeup says: "The President placed his own personal and political interests above the national interests of the United States, sought to undermine the integrity of the U.S. presidential election process, and endangered U.S. national security."

It also mentions a set of phone records that were reportedly subpoenaed from third parties. Democrats accused President Trump's allies of working with a conservative journalist to put out "false narratives" about then-U.S. Ambassador to Ukraine Marie Yovanovitch in an opinion piece.

On Monday, Republicans released a preemptive report defending the president and asserting that President Trump acted out of concern for U.S. interests. It says: "The evidence shows that President Trump holds a deep-seated, genuine, and reasonable skepticism of Ukraine due to its history of pervasive corruption. The President has also been vocal about his skepticism of U.S. foreign aid and the need for European allies to shoulder more of the financial burden for regional defense." The president himself has called the investigation a "hoax."

The Judiciary Committee is holding its first impeachment hearing on Wednesday. Four legal experts are scheduled to testify. The White House said the president and his attorneys will not be participating.