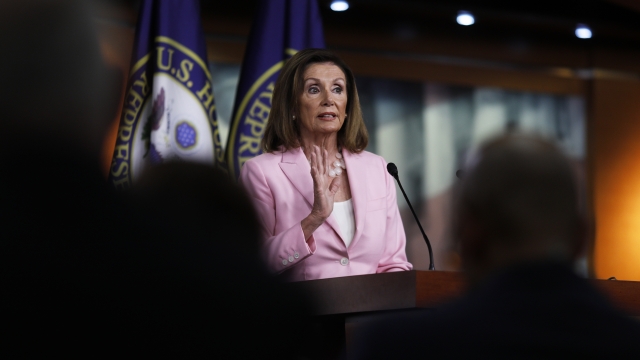 "The actions of the Trump presidency revealed dishonorable fact of the president's betrayal of his oath of office, betrayal of our national security and betrayal of the integrity of our elections," Pelosi said. "Therefore today I'm announcing the House of Representatives is moving forward with an official impeachment inquiry. I'm directing our six committees to proceed with their investigations under that umbrella of impeachment inquiry. The president must be held accountable. No one is above the law."

The president tweeted shortly after Pelosi's announcement, saying: "Such an important day at the United Nations, so much work and so much success, and the Democrats purposely had to ruin and demean it with more breaking news Witch Hunt garbage. So bad for our Country!"

Pelosi has previously resisted calls to begin impeachment proceedings against President Trump. But that pressure has only grown stronger as more details about the controversy involving the president, Joe Biden and Ukraine have surfaced.

On Friday, Pelosi commented on "reports of a reliable whistleblower complaint" regarding President Trump's communications with Ukraine's president. At the time she said, "We must be sure that the President and his Administration are conducting our national security and foreign policy in the best interest of the American people, not the President's personal interest."

The speaker later sent a letter to lawmakers warning that the Trump administration would be "entering a grave new chapter of lawlessness which will take us into a whole new stage of investigation" if it continued to block the complaint from being disclosed to Congress.

Pelosi is also planning to put a resolution addressing the Ukraine scandal on the House floor Wednesday.