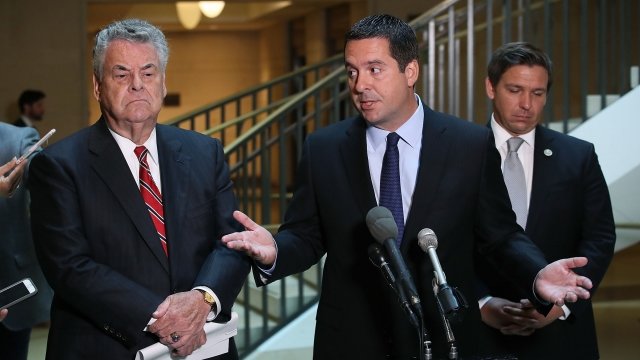 SMS
Congress Launches Dual Investigation Into Sale Of US Uranium To Russia
By Jake Jones
By Jake Jones
October 24, 2017
Recent reports claim an FBI investigation uncovered bribery and extortion before the deal was approved.
SHOW TRANSCRIPT

The House Intelligence Committee, along with the House Oversight Committee, is looking into whether the FBI was investigating alleged corruption that might have influenced a federally-approved sale of U.S. uranium holdings to Russia.

In 2009, Russia's state-owned nuclear energy agency Rosatom was looking to buy shares in Uranium One, a uranium mining company. Uranium One controlled about 20 percent of America's uranium production capacity in the form of land, mines and mills.

Rosatom bought 17 percent of the company that year. In 2010, it wanted to increase its holding to 51 percent, a majority share.

The Committee on Foreign Investment in the United States, or CFIUS, had to approve the Uranium One deal, and it did. But The Hill recently reported the FBI was investigating Rosatom officials for bribery, extortion and money laundering before the CFIUS voted on the deal.

Russia went on to acquire the rest of Uranium One and, by extension, the company's uranium holdings in the U.S.

Former Secretary of State Hillary Clinton ran one of the nine departments represented on the CFIUS panel when the deal went through. During the 2016 presidential campaign, Donald Trump accused Clinton of personally profiting from the sale.

The House investigations come just days after the Senate Judiciary Committee launched a probe to determine if federal agencies knew about the FBI's investigation and what it uncovered before the deal was approved.

Those agencies are due to respond Oct. 26.