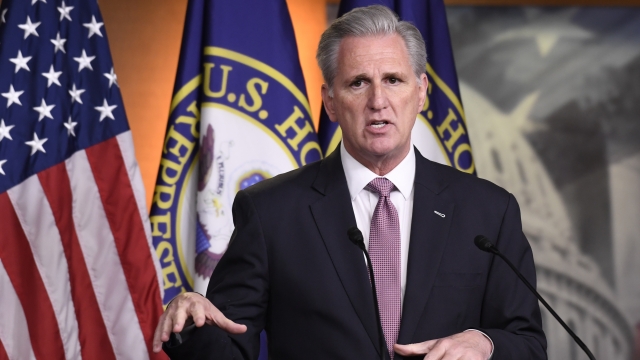 SMS
House Republicans Sue To Block Proxy Voting In The Chamber
By Katherine Biek
By Katherine Biek
May 27, 2020
House Minority Leader Kevin McCarthy and the other plaintiffs argue in their lawsuit that proxy voting is unconstitutional.
SHOW TRANSCRIPT

More than 20 House Republican lawmakers and four constituents filed a lawsuit against House Speaker Nancy Pelosi Tuesday, in an effort to block proxy voting in the chamber.

The House voted earlier this month to temporarily allow remote voting because of the coronavirus pandemic. Under those new rules, a member can vote on behalf of up to 10 of their colleagues who aren't able to make it to Washington, D.C. for floor votes. No Republican voted in favor of the change.

In the lawsuit, led by House Minority Leader Kevin McCarthy, the plaintiffs argue that proxy voting is unconstitutional because the Constitution requires a majority of lawmakers to be physically present in the chamber to do business.

They also allege the change dilutes the voting power of individual members who choose not to vote remotely through proxy.

McCarthy described the proxy voting decision as "reckless and partisan" in a statement Tuesday. He added, "Although I wish this matter could have been solved on a bipartisan basis, the stakes are too high to let this injustice go unaddressed."

Meanwhile, Pelosi criticized the lawsuit, calling it a "sad stunt" meant to "delay and obstruct urgently-needed action to meet the needs of American workers and families during the coronavirus crisis."

At least 63 House Democrats have notified the House Clerk that they plan to vote by proxy while it's allowed.