House Passes Bill To Avoid Shutdown, But It Looks Grim In The Senate 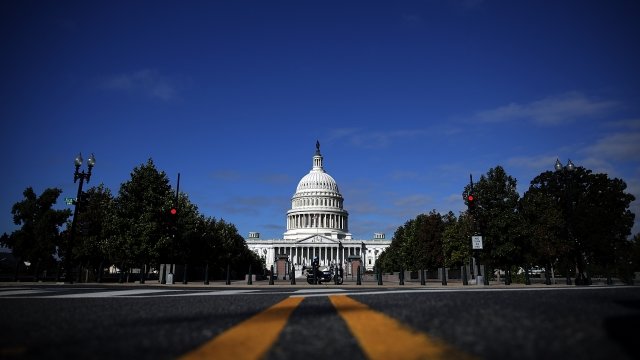 Senate Republicans need to convince weary Democrats to vote their way on a temporary spending bill, or the government will likely shut down.

The House of Representatives passed a short-term spending bill Thursday night to fund the government through mid-February. Now, it heads to the Senate, where its fate isn't quite clear.

So far, the votes needed to pass the bill in the Senate and avoid a shutdown just aren't there. Democrats are holding out for a deal to protect immigrants who were brought to the U.S. illegally as children. They could be deported in March if Congress doesn't pass an alternative to the Deferred Action for Childhood Arrivals program, or DACA.

The bill that's headed to the Senate might only be temporary funding, but it does include long-term funding for the Children's Health Insurance Program, or CHIP.

He seemed to go against the GOP plan to include the Children's Health Insurance Program in a stop-gap spending measure.

"Sen. Schumer, do not shut down the federal government," Ryan said Thursday night. "The only people standing in the way of keeping the government open are Senate Democrats."

"The one thing standing in our way is the unrelenting flow of chaos from the other end of Pennsylvania Avenue," Schumer said earlier Thursday, alluding to confusing messages from the White House on immigration and CHIP.

CNN reports the Trump administration is making calls to its various agencies to make sure plans are in place for a potential shutdown. The Senate was debating Thursday night about how to fund the government.