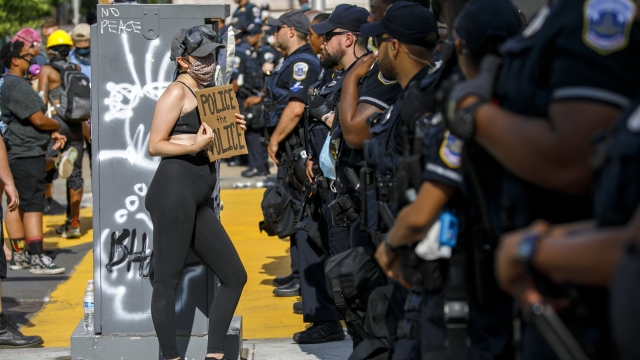 SMS
House Passes Police Reform Legislation, Faces Senate Pushback
By Meg Hilling
By Meg Hilling
June 26, 2020
There is speculation that reform efforts may be stalled until after the elections this fall, despite ongoing nationwide protests and calls for change.
SHOW TRANSCRIPT

Congress is at odds over police reform following the passing of a bill in the House Thursday.

Known as the George Floyd Justice in Policing Act, the Democrat-led legislation places a ban on chokeholds as well as creates a national database on officer misconduct. The legislation is considered to be much more far-reaching than a Republican-led police reform legislation proposed in the Senate, which does not include bans or mandates on police actions.

Although the bill passed in the House, Senate Majority Leader Mitch McConnell says the Democrat led-legislation will not pass in the Republican-held chamber, and President Trump says he would veto the bill if it did, according to the Associated Press.

While at odds over specific legislation, Democrats and Republicans in the House both say a common ground needs to be reached in order to serve the American people.

"So we really need to take a serious approach. If we can do that, it may be that some aspects of our bill could be modified, but the core of it really has to be real action, not just the sentiment of the Congress, but real action," Rep. Dan Kildee of Michigan said.

"We need to find a way to get some type of a common ground where we can respect law enforcement, respect the rights of our citizens and get to a better place," Rep. Chuck  Fleischmann of Tennessee said.

But with no compromise in sight, there is speculation that reform efforts may be stalled until after the elections this fall despite ongoing nationwide protests and calls for change.

Contains footage from CNN. Additional reporting from Lisa Mascaro of the Associated Press.