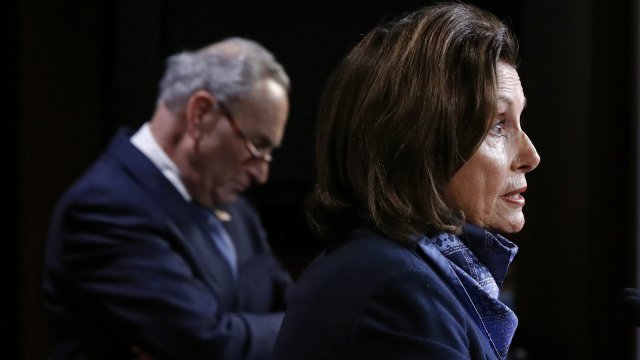 A $484 billion bill with more funding for small businesses, hospitals and testing is on its way to the president's desk. The House vote, while still overwhelmingly bipartisan, saw resistance from both sides. One Democrat, congresswoman Alexandria Ocasio-Cortez, and four Republicans including congressman Thomas Massie voted against the measure. Congressman Justin Amash voted present.  The Senate passed the same bill by unanimous consent Tuesday afternoon.

This round of funding is more targeted than the last relief package: $310 billion for the Paycheck Protection Program, loans designed to incentivize small businesses to keep their employees on the payroll. Some of these funds will go to community banks and smaller lenders.

Hospitals and health care providers will get an additional $75 billion to buy personal protective equipment and increase capacity, as well as to make up for lost revenue from the freeze on elective surgeries.

Congress is also providing an additional $25 billion to be shared between federal, state, local and tribal authorities to increase testing. The CDC and National Institutes of Health will get $1 billion each to continue their COVID-19-related work.

The crux of the bill, the funds allocated to the Paycheck Protection Program, have some members of Congress concerned about distribution. Public companies like Potbelly and Ruth's Chris were able to secure loans, and many small businesses weren't. Michigan Sen. Gary Peters is asking for a Government Accountability Office report initially set to be released in June to be done as soon as possible.

"We're looking at more assistance for small businesses and it's important for us to know how the money has already been spent," the Democratic senator said.

Peters says even with the replenishment, the fund is expected to evaporate quickly, and Congress will likely have to allocate more money. The Treasury Department said Thursday, "It is unlikely that a public company with substantial market value and access to capital markets will be able to make the required certification in good faith."

The bipartisan deal comes as Congress wrestles with how to conduct business in a pandemic. Nearly every House member walked on to the floor to vote Thursday, less than 24 hours after Democrats pulled back a proposal to enable "proxy voting" because of lack of Republican support. Instead, members, many in masks, voted in nine groups by alphabetical order and were told to stay in their offices until called to the floor.

"Congress is essential. The American public needs to see that we're working and we can do it in a safe manner so states and localities can begin to open up as well," said the Republican leader.

Congress now looks toward a fifth round of funding which Democrats say will focus on food assistance, state and local government funding, and funding for elections.