House Passes Bill To Raise The Federal Minimum Wage To $15 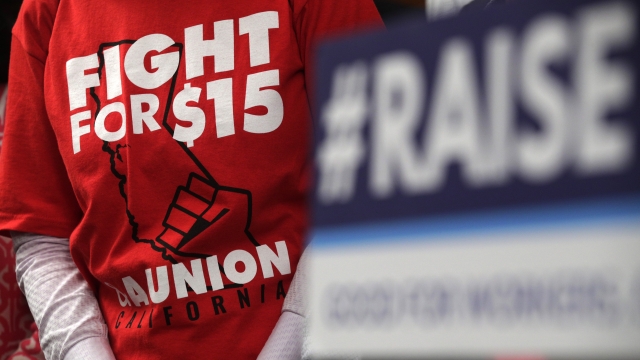 SMS
House Passes Bill To Raise The Federal Minimum Wage To $15
By Briana Koeneman
By Briana Koeneman
July 18, 2019
The Raise the Wage Act would gradually bring the federal minimum wage up from $7.25 to $15 by 2025. But it's not expected to become law.
SHOW TRANSCRIPT

The House has passed a bill that would raise the federal minimum wage.

Only three Republicans voted in favor of the legislation. And in its current form, the bill's chances of passing in the GOP-controlled Senate are slim to none. Still, proponents of the "Fight for $15" movement are applauding the House vote as a major victory.

"We're going to continue to stand up for working families, middle-class folks, senior citizens, the poor, the sick, the afflicted, and fight for the people," Rep. Hakeem Jeffries said.

According to data compiled by the Congressional Budget Office, the Raise the Wage Act could put more money in the pockets of as many as 27 million American workers and lift 1.3 million people out of poverty.

But that might come at a price — the CBO says 1.3 million workers could lose their jobs as a result of the legislation.