House Passes Bill To Give 'Dreamers' A Path To Citizenship 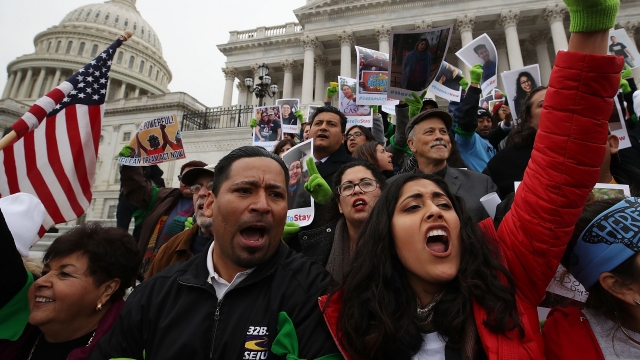 SMS
House Passes Bill To Give 'Dreamers' A Path To Citizenship
By Ahmed Jawadi
By Ahmed Jawadi
June 4, 2019
​The measure would create a new legal pathway for more than 2 million immigrants.
SHOW TRANSCRIPT

The House has passed a bill that would offer a path to citizenship for millions of people, including those who were brought to the U.S. as children.

On Tuesday, the House passed the American Dream and Promise Act of 2019 by a vote of 237-187. The measure would create a new legal pathway for more than 2 million immigrants, including individuals with Temporary Protected Status, Deferred Enforced Departure recipients, and those brought to the U.S. as children, commonly known as "Dreamers." It would grant "Dreamers" 10 years of legal residence status after meeting certain requirements. They would then be eligible for permanent green cards if they work for three years or if they complete at least two years of higher education or military service.

With the bill's passage in the House, it'll now head to the Republican-led Senate, which will probably not bring it up for a vote. The White House said in a statement Monday it "strongly opposes" the measure, adding that it "would incentivize and reward illegal immigration while ignoring and undermining key Administration immigration objectives and policy priorities, such as protecting our communities and defending our borders." The statement concluded by saying that "if [the bill] were presented to [President Donald Trump] in its current form, his advisors would recommend that he veto the bill."