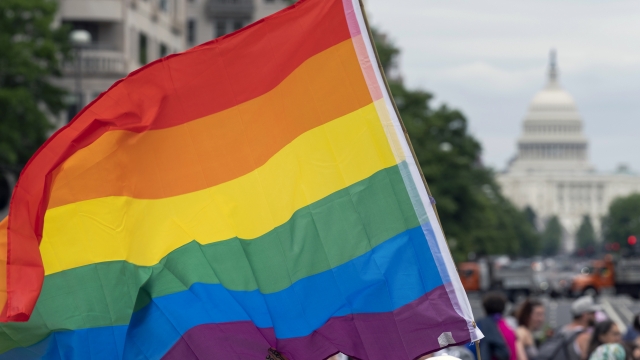 "How long will my marriage be protected?," Morrison said.

With the constitutional right to an abortion now gone, many worry same-sex marriage could be next.

"My main thought was my sister and my female friends who, you know, this is impacting them in an immediate sense. But it wasn't long before I started thinking, again, what precedent does this set?," he continued.

The Supreme Court watchers zeroed in on a comment made by Justice Clarence Thomas in his concurring opinion on the ruling.

He said the Supreme Court should, quote, "reconsider all of this court's substantive due process precedents" including Obergefell, adding that it's up to the nation's highest court to, quote, "correct the error."

Democratic leaders quickly vowed to respond with legislation to codify same-sex marriage and other rights.

"I absolutely do worry about same-sex marriage. I worry about the policing of all sex acts in general," said Democratic Representative Alexandria Ocasio-Cortez.

One of those bills is the Respect for Marriage Act.

It would officially repeal the 1996 Defense of Marriage Act signed by President Bill Clinton, which defines marriage as a union between one man and one woman.

Supreme Court decisions in 2013 and 2015 ruled it was unconstitutional.

But the law is technically still on the books, even if it can't be enforced, and Democrats want to repeal it and for all. They also want to take steps to ensure that all same sex and interracial marriages are recognized between states.

"The MAGA Republicans that are taking over the Republican party have made it abundantly clear they're not satisfied with repealing Roe. As many have openly said, they've now turned their attention now on the Obergefell decision and marriage equality. We need to pause and think about how unhinged, unhinged this idea is," said Senate Majority Leader Chuck Schumer.

Some congressional Republicans are taking the opposite stance.

"In Obergefell, the court said, 'no, we know better than you guys do, and now every state must, must sanction and permit gay marriage.' I think that decision was clearly wrong when it was decided. It was the court overreaching," said Senator Ted Cruz.

As this legislation begins its journey through Congress, the LGBTQIA community is bracing for impact.

"People who are married and who are gay are now looking to reinforce their marital situation with their spouses and the privileges that go along with marriage. And they are trying to shore up their rights by wills and powers of attorney and advanced health care directives," attorney Sydney Duncan said.

But many are rallying with a message of hope and a promise to fight.

Tiffany Freisberg is the president of St. Pete Pride.

"It's a threat, it's a threat. But there's a lot of people who don't want to see us going backwards. And we're going to do what we can to make sure that doesn't happen," Friesberg said.