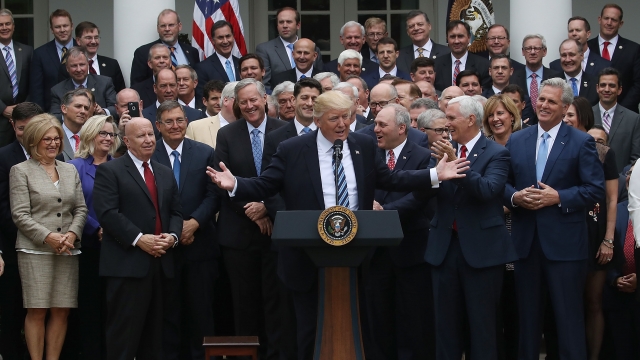 And if the stark differences in reactions to Thursday's vote are any indication, it's going to be a contentious process.

"We're going to get this passed through the Senate. I feel so confident," Trump said in a statement in the Rose Garden after the bill's passage.

But don't expect that anytime soon.

Shortly after the bill passed the House, the chairman of the Senate's health committee said the Senate would "finish work on our bill, but will take the time to get it right."

That means the Senate will likely vote on its own newly written bill, rather than a revamped version of the House's bill. And Senate Republicans can afford fewer defections than the House GOP.

Twenty House Republicans voted against the House bill and ended up getting one more vote than needed to pass it. Senate Republicans can only stand to lose two votes.

See What's In The Funding Bill Passed By The House

The bill is more than 1,600 pages long. We highlighted the main spending points.

So the bill will likely have to appeal to moderates. Some aspects of a bill that would appeal to them might not fly with some more conservative House GOP members.

Regardless, the Senate won't consider health care legislation until it's done writing its bill and until the Congressional Budget Office releases its analysis of the bills' costs.

And if the stark differences in reactions to Thursday's vote are any indication, it's going to be a contentious process.

House Speaker Paul Ryan said in the Rose Garden, "It makes health care more affordable, it takes care of our most vulnerable and it shifts power from Washington back to the states, and most importantly, back to you, the patient."

"Most people don’t know who their Member of Congress is. Well they do now. They know them as a Member of Congress who made their premiums and out-of-pocket go up, had a crushing age tax on those 50 to 64, have 24 million people fewer have access to health care, health insurance, and again, being very casual, undermining recklessly Medicare," Democratic Leader Nancy Pelosi said.