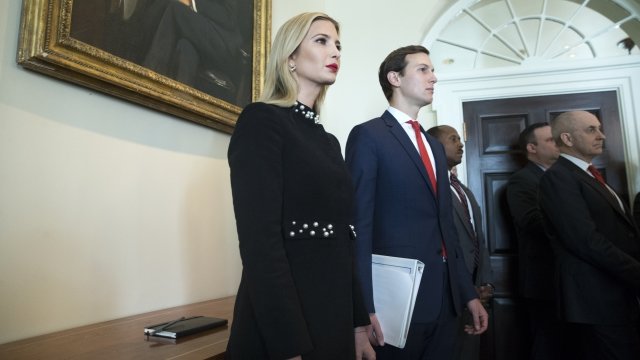 Some congressional lawmakers want to renew an investigation into White House staffers' communications — this time including Ivanka Trump's email use.

Rep. Elijah Cummings, the top Democrat on the House Oversight Committee, said Tuesday that the panel plans to look into the issue when his party takes control of the House in January. And the committee's outgoing chair, Republican Rep. Trey Gowdy, has asked the White House for more information on Trump's email activity.

They're referring to a White House review of Trump 's 2017 correspondence, which revealed she repeatedly used a personal account to conduct government business. That's according to the Washington Post.

It's been making headlines in part because that could violate federal law, and also because Hillary Clinton's use of a personal email account and private server was a big talking point for President Donald Trump during his 2016 presidential campaign.

He repeated that claim to reporters Tuesday.

"What Ivanka did, it's all in the presidential records. Everything is there. There was no deletion, there was no nothing. What it is, is a false story. Hillary Clinton deleted 33,000 emails. She had a server in the basement. That's the real story," he said.

As we mentioned, it's not the first time this issue has come up. The oversight panel started a bipartisan probe last year into White house staffers' use of personal email, but ran into roadblocks when the requested information reportedly wasn't handed over.