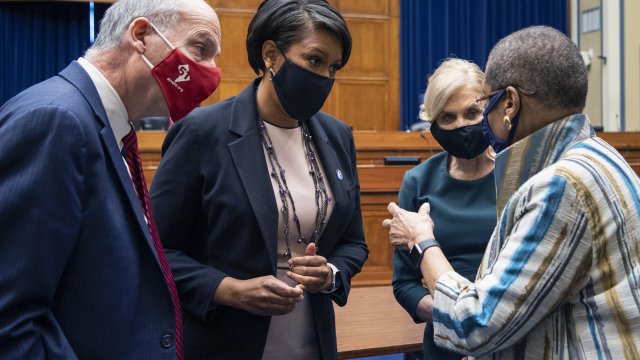 SMS
House Panel Holds Hearing On Granting D.C. Statehood
By Newsy Staff
By Newsy Staff
March 23, 2021
Republicans argued Democrats are just trying to add to their majorities in the House and Senate since D.C. is heavily Democratic.
SHOW TRANSCRIPT

Could Washington D.C. become the 51st state? Advocates are urging lawmakers to support a bill that would make that goal a reality.

They told the House Oversight Committee yesterday it's time to right what they consider a wrong. 712,000 people who live in Washington don't have federal representation, despite paying federal taxes.

Republicans argued Democrats are just trying to add to their majorities in the House and Senate since D.C. is heavily Democratic.

"Plan a was to eliminate the filibuster in the Senate," said Rep. James Comer. "But since it appears Joe Manchin isn't going to play these dirty Democratic games, now Speaker Pelosi is stepping in with an unconstitutional bill to make Washington D.C., a city smaller than Columbus, Ohio, and a city that just happens to be 90% Democratic, the 51st state."

D.C. has a larger population than two states and pays more in federal taxes per capita than over 20 states. Some Republican members on the panel proposed cutting D.C. residents' federal taxes to compensate for not having voting members in Congress. But D.C. Mayor Muriel Bowser argued that misses the point.

"86% of our electorate says they want to be full Americans," said Mayor Bowser. "They want to be full tax-paying Americans. they're not interested in shirking their responsibilities. As they have done for the history of our nation: served our nation, paid our taxes and all we are asking you today is to correct an anomaly of our history. To make sure we have full representation with our congresswoman getting a vote and having two United States senators."

The House passed an identical bill granting statehood in its last term. But with Democrats now in the White House and holding both chambers of Congress, advocates believe now is the time to renew their efforts.