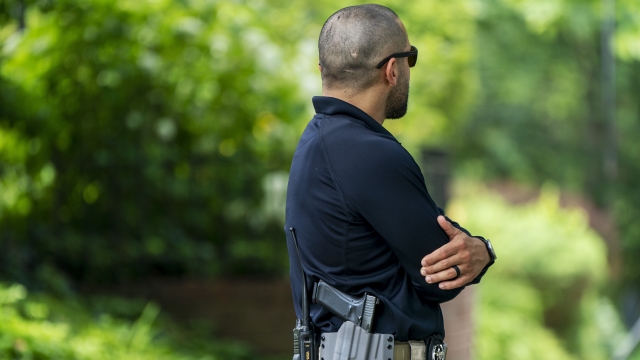 The House gave final approval Tuesday to legislation that would allow around-the-clock security protection for families of Supreme Court justices, one week after a man carrying a gun, knife and zip ties was arrested near Justice Brett Kavanaugh's house after threatening to kill the justice.

The Senate passed the bill unanimously last month, but it languished in the House as Democrats sought to broaden the measure to include protection for families of court employees. Republicans ramped up pressure to pass the bill after the arrest at Kavanaugh's house, asserting that Democrats were essentially trying to intimidate the justices as the court weighs a potential landmark ruling on abortion.

The House passed the security measure overwhelmingly, 396-27. All of the votes in opposition came from Democrats.

"By passing this bill as is, we are sending a clear message to left wing radicals: you cannot intimidate Supreme Court justices," said House Republican leader Kevin McCarthy.

The Senate voted to expand security protections shortly after the leak of a draft court opinion that would overrule Roe v. Wade and sharply curtail abortion rights in roughly half the states. Supporters of the legislation said threats to the justices have increased since then, with protesters sometimes gathering outside their homes.

"We don't have time to spare when it comes to protecting the members of the court and their families," said Republican Sen. John Cornyn, the bill's sponsor. "If, heaven forbid, something were to happen ... shame on members of the House of Representatives. It would be on them for their failure to act on this commonsense, bipartisan bill."

Democrats noted that the Supreme Court justices already have round-the-clock security details. They said they also supported extending security to immediate families. But they wanted "one itty bitty concession" to include security for families of court employees, such as the law clerks who work for the justices and help them prepare for cases.

But last week's arrest clearly brought new emphasis to the bill and new pressure from Republicans seeking a vote. Democrats said they would pursue the protections for families of court employees separately.

"We can no longer delay in passing the only version of the bill they would apparently agree to," Lieu said of Republicans.

In the Kavanaugh case, authorities have charged Nicholas John Roske, 26, of Simi Valley, California, with the attempted murder of a justice. Clad in black, he arrived by taxi outside Kavanaugh's Maryland home around 1 a.m. Wednesday.

He spotted two U.S. marshals who were guarding the house and walked in the other direction, calling 911 to say he was having suicidal thoughts and also planned to kill Kavanaugh, according to court documents.

Roske said he found the justice's address on the internet.