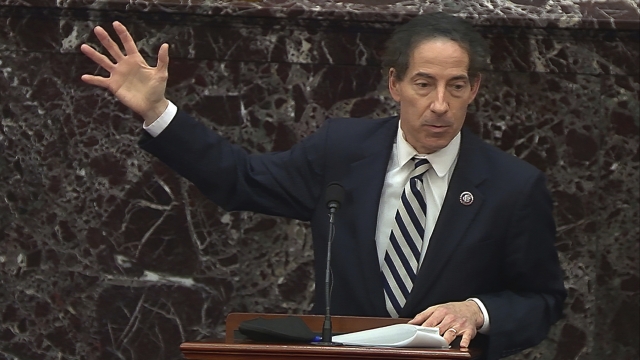 On day three of former President Trump's second impeachment trial, the House managers continued to lay out their case for conviction.

They presented numerous examples of insurrectionists saying they thought they were acting on Trump's orders.

"Their statements before, during and after the attack made clear the attack was done for Donald Trump, at his instructions and to fulfill his wishes," said Rep. Diana DeGette, a House impeachment manager.

"As more and more of these people have been charged, the confession and the regret simply cascades," said DeGette.

They also criticized the former president for not admitting that his words played a role in the insurrection and said he showed a lack of remorse.

"That's why lack of remorse is an important factor in impeachment. Impeachment, conviction and disqualification is not just about the past. It's about the future. It's making sure that no future official, no future president, does the same exact thing President Trump does," said Rep. Ted Lieu, a House impeachment manager.

Thursday's arguments also included recorded interviews from members of Congress, staffers, journalists and others who were inside the Capitol during the siege. The managers linked the insurrection to increased domestic and international security concerns. And they included more examples designed to show that Trump spent months inciting his supporters and that the ensuing violence on Jan. 6 was foreseeable.

"This Trump-inspired mob may indeed look familiar to you. Confederate battle flags, MAGA hats, weapons, camo Army gear. Just like the insurrectionists who showed up and invaded this chamber on Jan. 6. The siege at the Michigan Statehouse was effectively a state-level dress rehearsal for the siege at the U.S. Capitol that Trump incited on Jan. 6," said Rep. Jamie Raskin, the lead House impeachment manager.

As their arguments were coming to a close, the managers targeted Trump's anticipated defense arguments, including First Amendment protection and a lack of due process.

"President Trump wasn't just some guy with political opinions who showed up at a rally on Jan. 6 and delivered controversial remarks. He was the president of the United States. And he had spent months, months, using the unique power of that office, his bully pulpit, to spread that big lie: that the election had been stolen," said Rep. Joe Neguse, a House impeachment manager.

"Now, in other impeachment cases the House has provided certain deliberative and procedural privileges to the person being impeached. But those are exactly that: privileges. They are discretionary. The House has the power to decide its own rules," said Lieu.

Day four of the trial will begin at noon Eastern on Friday, when Trump's defense team will start to present its case.