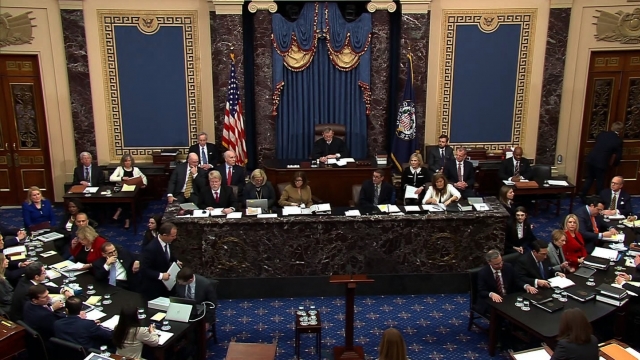 SMS
House Managers Make Opening Statements During Impeachment Trial
By Terace Garnier
By Terace Garnier
January 22, 2020
On day 2 of the trial, House managers argued their case as some Democrats accused President Trump of confessing to wrongdoing in a news conference.
SHOW TRANSCRIPT

"When the president's scheme was exposed and the House of Representatives properly performed its constitutional responsibility to investigate the matter, President Trump used the same unrivaled authority at his disposal as commander in chief to cover up his wrongdoing. In unprecedented fashion, the president ordered the entire executive branch of the United States of America to categorically refuse and completely obstruct the House's impeachment investigation. Such a wholesale obstruction of congressional impeachment has never before occurred in our democracy. And it represents one of the most blatant efforts at a cover-up in history,” lead impeachment manager Rep. Adam Schiff said.

Democratic managers have 24 hours over three days to persuade senators to vote to remove President Trump from office. Then the president's legal team will get its turn. Democrats are still upset multiple amendments to subpoena documents from the White House, the State Department and the Defense Department were defeated.

The 45th president faces charges of abuse of power and obstruction of Congress.

"This is the greatest witch hunt. ... This started the day I came down with the future first lady. ... The day we came down the escalator, this started. ... They've been driven crazy." President Trump said in a video tweet.

And he continues to declare his innocence.

"It's a hoax," President Trump said during multiple interviews.

During a news conference at the World Economic Forum in Davos, Switzerland, President Trump said he was happy with the way the impeachment trial was going so far.

"We're doing very well. I got to watch enough. I thought our team did a very good job, but honestly, we have all the material. They don't have the material," President Trump said.

But Democrats say this statement alone acts as a confession of wrongdoing.

"The second article of impeachment was for obstruction of Congress: covering up witnesses and documents from the American people," Rep. Val Demings said in a tweet. "This morning, the president not only confessed to it, he bragged about it."

Reports show nearly 50 Republicans are ready to dismiss charges and push senators to end the trial.

"Not the Senate's job to mop up the mess made in the House by the Democrats. [Joe] Biden admitted that he went to Ukraine and did the Quid Pro Quo," the president tweeted.

After each side gives opening statements, Majority Leader Mitch McConnell has promised to address the issue of whether to allow new witnesses or documents.