Shooter Is Dead After Injuring GOP Lawmaker, Others 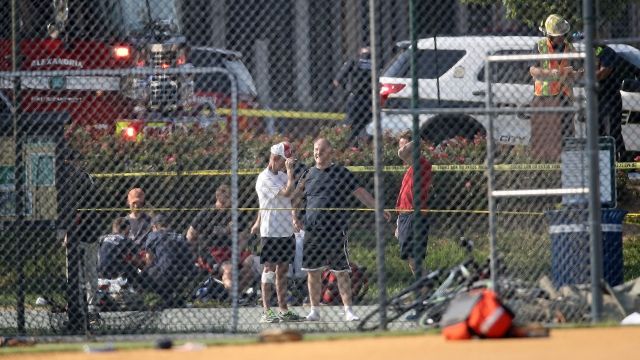 The FBI is investigating a shooting at a baseball field in Alexandria, Virginia, that injured at least four people, including a congressman.

Rep. Mo Brooks witnessed the shooting. He was the first to tell the media that House Majority Whip Steve Scalise was hit by gunfire.

Scalise was shot in the hip and needed surgery after being transported to the hospital. A statement from his office said he was in good condition and was able to speak to his wife before surgery.

At least one medical helicopter helped transport the injured to local hospitals.

The FBI declared the Pulse nightclub shooting an act of terror — but not a hate crime — despite the shooter targeting a gay club during Latin night.

Two U.S. Capitol Police officers were among those injured, but both are in good condition.

"I was with Sen. Paul in the gym, who had been there, and he told me had these two Capitol Police officers, who were part of Congressman Scalise's detail, not been there, it might have been a massacre, 'cause there would have been no one to respond," Sen. Chuck Schumer said on the Senate floor.

"We're deeply indebted to their service. We again salute their continuing and unfailing bravery on behalf of the Capitol community," Senate Majority Leader Mitch McConnell said on the Senate floor Wednesday morning.

This morning the hearts of the whole House are with @SteveScalise, the brave Capitol police, staff, and all those who were in harm's way.