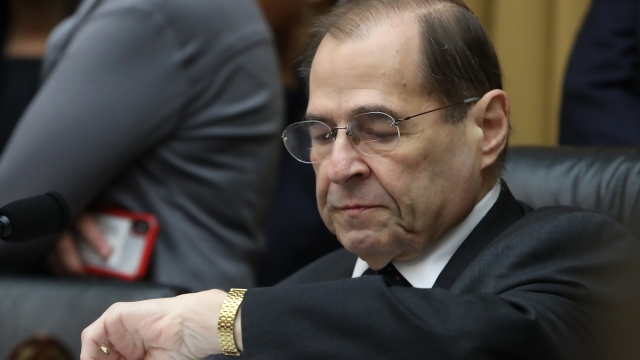 SMS
A Precedent-Setter: Executive Privilege Vs. Congressional Oversight
By Cliff Judy
By Cliff Judy
May 8, 2019
As the Trump administration and House Democrats spar over investigations into the president, two implied constitutional powers are at odds.
SHOW TRANSCRIPT

"While we have seen these sorts of battles before, this is on a level that we have not experienced," says University of Missouri professor Peverill Squire.

"This is information we are legally entitled to receive and we are constitutionally obligated to review," House Judiciary Chair Jerry Nadler said Wednesday.

"It's truly outrageous and absurd what the chairman is doing, and he should be embarrassed that he's behaving this way," said White House press secretary Sarah Sanders.

For constitutional scholars, this is more of the same ... and at the same time, not. Professor Peverill Squire of the University of Missouri says two implied constitutional powers — congressional oversight and executive privilege — are at odds.

"What we have going on right now is a continuation of a battle that we've had from the beginning," says Squire. "Which is exactly who gets to do what in our system of government."

"Both sides are hoping that the political pressure will play to their advantage and that the ultimate solution will be negotiated between the competing branches."

House Democrats have pushed for the releases of the unredacted Mueller report, called for key Trump administration figures like Attorney General William Barr and former White House counsel Don McGahn to testify, and even requested the president's tax returns. All of the oversight met with a "no." Most of the "no's" citing executive privilege.

"Congress has a desire to be able to oversee what the executive is doing," says Squire. "The executive would like to protect to the extent possible the deliberations within the executive branch to allow people who work for the president to speak freely to the president without having to worry about whether their words will eventually be used against them in some public forum."

Professor Squire tends to think Congress has better footing right now if, for instance, the fight over seeing the Mueller report when to court.

"Well, they're both pushing hard, but certainly the president has done things that no previous president has done," says Squire. "Which is sort of issue blanket assertions of privilege, blanket refusals to submit to subpoenas, blanket attempts to keep members of the administration from having to come testify before Congress."

"And not even the Nixon administration contemplated doing that," says Squire. "So I think we really are in a place where we have not been before."

But regardless of who gets the upper hand, Squire says you can be assured of one thing. The third branch — the one deriving its public trust and power from the concept it's not a politically-motivated body — wants none of this fight.

"This is not something that the conservative members of the Court would want to be forced to decide," says Squire. "They would much rather have this be resolved in the political sphere."

"I think this is one of those rare instances where we are at a point where we do have very serious constitutional issues to resolve. And that this is going to take some statesmanship of the sort that seems to be in ... well, there's not a lot of it right now in D.C. on either side."