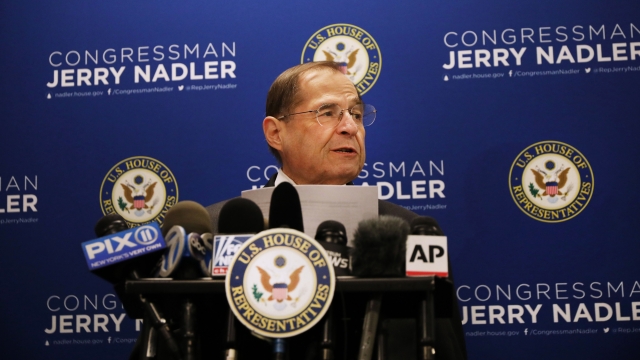 SMS
House Judiciary Committee Subpoenas Unredacted Mueller Report
By LeeAnne Lowry
By LeeAnne Lowry
April 19, 2019
The subpoena was served to Attorney General William Barr Friday morning. It requires him to turn over the materials by May 1.
SHOW TRANSCRIPT

House Judiciary Committee Chairman Jerry Nadler subpoenaed the full, unredacted Mueller report and underlying materials Friday. He says the documents are necessary to make a decision about whether the president obstructed justice.

The subpoena was served to Attorney General William Barr. It requires him to turn over the materials by May 1. While the report has to be unredacted, other documents can withhold information if Barr provides a full explanation.

Barr and special counsel Robert Mueller are both expected to testify before the committee in May.

The Justice Department was already planning to let some lawmakers see a less-redacted version of the Mueller report next week.

On Thursday, the Justice Department sent a letter to Nadler and Sen. Lindsey Graham. It said 12 Congressional leaders will be able to enter a secure room at the Justice Department between April 22 and April 26 to view the documents. The report will have all the redactions removed except for grand jury information.

The lawmakers will be able to bring one staff member each, and they will be filmed as they read. They can take notes, but the notes have to stay in secure storage. Those notes can be transferred by Justice Department officials to Capitol Hill for filmed review sessions.