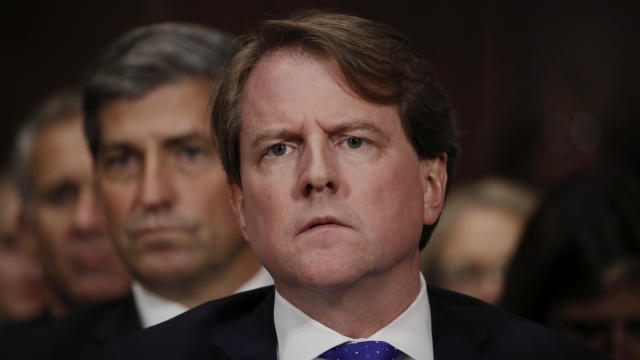 The House Judiciary Committee has subpoenaed former White House counsel Don McGahn as part of its investigation into possible obstruction of justice by President Donald Trump.

Committee members issued the subpoena less than a week after the Department of Justice released a redacted version of special counsel Robert Mueller's report to the public. The report found no evidence of collusion between Russia and the Trump campaign, but it did not conclude whether or not President Trump obstructed justice, which is why Democrats are now investigating.

In a statement Monday, House Judiciary Committee Chairman Jerry Nadler said: "McGahn is a critical witness to many of the alleged instances of obstruction of justice and other misconduct described in the Mueller report. His testimony will help shed further light on the President's attacks on the rule of law, and his attempts to cover up those actions by lying to the American people and requesting others to do the same."

Some Democrats have called for impeachment proceedings to start, but on Monday, House Speaker Nancy Pelosi said she wants to focus on the facts before making a move like that. In a statement, Pelosi said even though her Democratic colleagues' views on next steps range from investigating further to impeachment, they "all firmly agree that we should proceed down a path of finding the truth."

The subpoena asks McGahn for a long list of documents, including documents related to the June 9, 2016 Trump Tower meeting; the termination of James Comey; and possible presidential pardons for people associated with the Trump campaign. The committee wants the documents by May 7 and wants McGahn to testify on May 21.