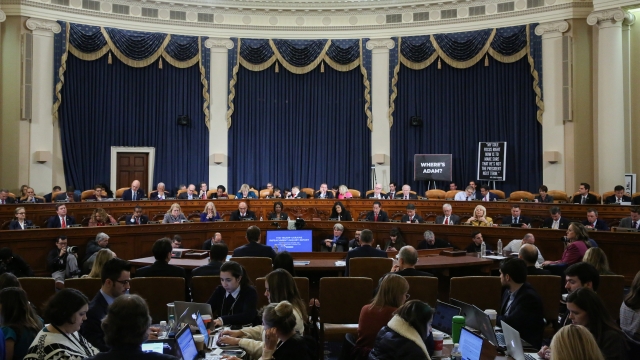 A contentious presentation day on Capitol Hill – lawyers for the House Judiciary and Intelligence Committees laid out their cases for and against impeachment.

Majority counsel Barry Berke: “And this scheme by President Trump was so brazen, so clear, supported by documents and actions sworn testimony on contradicted contemporaneous records that it's hard to imagine that anybody could dispute those acts, let alone argue that that conduct does not constitute an impeachable offense or offenses.”

Minority counsel Steve Castor: "The record in the democrats impeachment Inquiry does not show that President Trump abused the power of his office or obstructed Congress to impeach a president who 63 million people voted for over eight lines in a call transcript is baloney.”

From start to finish – it was heated. Republicans interrupted the proceedings many times. They questioned the committee's rules and expressed frustration Intel Committee Chairman Adam Schiff was not testifying.

And said it was unfair Judiciary Counsel Barry Berke both testified as a witness and then flipped roles – as a questioner.

Gohmert: "We've been told that the counsel for the democrats was a witness, and that's why he didn't have to comport with the rules of de quorum and now he's sitting up here... I've been a judge. I know you don't get to be a witness and a judge in the same case. That's my point of order. He should not be up here."

Before defending the President against the substance of Democrats’ findings, Republican Counsel Steve Castor criticized the process, alleged the Democrats hate the president and what he says is their constant desire for impeachment.

“The Democrats went searching for a set of facts on what to impeach the president: the Emoluments Clause, the President's business and financial records, the Mueller report, allegations of obstruction before landing call on the Ukraine phone call," Castor said. "Impeachment inquiry is clearly an orchestrated effort to up end our political system."

Democrats said the facts are clear: alleging President Trump abused his power – put the country’s interests at risk for his own personal gain, and worked to interfere in future elections.

Majority counsel Daniel Goldman: "It is clear that the goal was not the investigations themselves and not any corruption that those investigations might have entailed, but the political benefit that President Trump would enjoy from an announcement of investigations into his 2020 political rival."

While Democrats have not said whether they'll include previous investigations, like the Mueller probe – in articles of impeachment – Chairman Jerry Nadler made it clear he sees President Trump's actions as a pattern.

"The President welcomed into foreign interference in our elections in 2016. He demanded it for 2020. Then he got caught," Nadler said. "This pattern of conduct represents a continuing risk to the country.”

This is likely the last hearing for the Judiciary Committee. Sources told Newsy the committee could vote on articles of impeachment as early as this week – setting it up for a full House vote as early as next week.